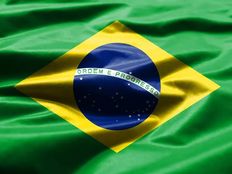 Lydon opens by explaining the economic turnaround that Brazil has managed in the last year, recovering from poor economic and stock market performance to strong growth. Brazil is a major exporter of commodities such as crude oil, iron, sugar cane, and coffee beans and has benefited from the rising commodity prices driven by inflation.

“Inflation has just been mind-boggling, and there are some economies that actually benefit from that. Brazil is one of them,” Lydon says.

It’s also an election year for Brazil, and one of the candidates, Luiz Inacio Lula da Silva, a former president of the country from 20 years ago, is currently favored in polls against the incumbent, President Jair Bolsonaro. If Lula da Silva is elected in the fall, it would bring change for the country at a time when people seem to be wanting it most.

“The country is looking for change for so many different reasons, but on top of that, since they’re a big exporter of resources and they’re feeling confident about an election cycle that could bring change to the government, it’s been very beneficial for the stock market in general in Brazil,” Lydon explains.

For advisors and investors, the reason to allocate to FLBR isn’t for an emerging market play but instead for a commodity play, according to Lydon. The majority of securities contained within FLBR are based within the commodities sector, which is currently experiencing strong price gains on rising inflationary pressures.

Lydon goes on to explain that as an emerging market country, some of the stocks that FLBR contains might be at more favorable valuations than those in the U.S. markets.

The fund is a 200-day moving average play and one to watch, as prices could continue to rise or could fall back into their underperforming ranges from a year ago, depending on a variety of factors. While commodity prices remain elevated, FLBR offers the potential to add alpha to a portfolio.

Addressing concerns of how the Russia-Ukraine war will impact the securities within the fund and the fund’s ability to perform, Lydon believes that even if the war resolves quickly, at this point, most countries have still committed to allocating away from Russia for energy and other commodities.

“That does nothing but put Brazil in a better situation as an alternative as a trade partner to many other countries around the world,” Lydon says.