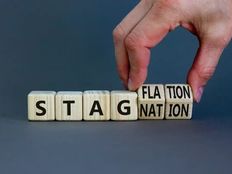 Inflation has really become the top concern and term for this year, Lydon explained, with money moving around at phenomenal rates.

“There’s a lot of money in motion; since we’ve been tracking ETFs, we haven’t seen flows going in so many different directions as we have so far this year,” Lydon said.

Traditional portfolios with a 60% allocation to equities and a 40% allocation to fixed income are seeing definite negative impacts on the bond side from rising rates. So far in 2022, there have been more inflows to U.S. commodity ETFs than there have been to fixed income funds, a drastic difference from years past and something that has never happened before, according to Lydon.

“Especially for those that are close to retirement or are in retirement that had that safe haven in bonds where they could get some income that they could live off of, it’s not working. It’s not providing safety, and the income it’s providing isn’t enough to keep up with inflation,” Lydon said.

This has meant that advisors and investors have been shifting their allocations, seeking areas of income opportunity and refuge from the continued negative performance of much of fixed income.

STGF has a large portion of its allocations weighted into Treasury inflation protected securities (TIPS), thereby allowing the fund to remain current with inflation. TIPS can provide higher yield than traditional Treasuries, but Lydon cautioned that they don’t always offer downside risk protection.

“The other things it has allocations to areas like real estate, oil, gold, that also traditionally do well during times of inflation, and those areas help diversify the portfolio too,” Lydon explained.

A Different Core Strategy for a New Environment

The fund can be good for advisors and investors who may be concerned about the balances of their portfolios, particularly within fixed income, but don’t want to allocate hard into commodities. It could be a good play for those looking to pivot 10%–20% of their fixed income allocations, as it could potentially provide less pain for the portfolio as interest rates continue to increase, according to Lydon.

Investing into STGF isn’t a trend-following play but instead is a potential core strategy for those advisors and investors who have had long-term allocations in a traditional portfolio but are looking to pivot that portfolio in an extended inflationary environment.

“This is one of those core strategies at a time when we haven’t seen inflation as harsh in over 40 years. Not to fan the flames, but they changed the way they look at the CPI — it’s measured differently — and if we use the same metrics that we did back in the ’70s, we would be well into the double digits if we measured it the same way,” Lydon said.