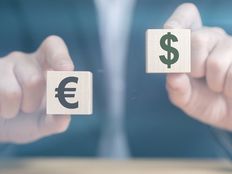 ETFs that profit when the dollar advances against a basket of developed currencies are advancing this week as fears of recession grip the Eurozone and its dominant economy Germany, offering investors a way to bet that Europe’s economic future is shakier than America’s.

The euro dropped to a near-two decade low against the dollar on Tuesday, falling 1.7% to a rate of 1.024 euros per dollar and sparking worries that the two currencies would hit even pricing for the first time since December 2002.

Currency ETFs generate their returns by measuring a currency’s performance against one or more currencies from countries with similar levels of development.

For example, the Invesco DB U.S. Dollar Index Bullish Fund (UUP B) holds futures contracts on the greenback long and shorts the euro, Japanese yen, British pound, Canadian dollar, Swedish krona, and Swiss franc. When the dollar gains against the value of those combined currencies, the ETF produces a positive return, and vice versa when the dollar’s value slips against the competing currencies. UUP is up 10.96% year-to-date.

The WisdomTree Bloomberg U.S. Dollar Bullish Fund (USDU ) is also up on the year but is trailing UUP in performance by approximately 2% since it tracks the dollar against a broader set of competing currencies and has less exposure specifically to the euro.

It seems counterintuitive to have exposure to currencies when the U.S. has faced months of inflation not seen since the 1970s. However, similar bouts of high inflation across Europe and other developed countries caused by a mix of COVID-related supply chain shocks, monetary policy, and the war in Ukraine are keeping pace with rising prices stateside. The Eurozone’s lead inflation indicator hit 8.6% year-over-year last week.

The key driver for bullish dollar funds earlier this year was the Federal Reserve’s rate hikes and its stated intent to keep hiking until inflation cools. That sent Treasury yields rising, in turn generating demand for dollars from investors wanting better yield from the pieces of their portfolios tied to government debt.

The European Central Bank has taken its time toward reducing economic support compared to the Fed and intends to issue approximately 135 basis points of hikes in 2022 starting this month. The start of the cycle begins after 11 years without a rate hike in the 19-member common area.

While fears of a recession in the U.S. are mounting over the Fed’s efforts to cool inflation conflicts with economic growth prospects, the eurozone is facing a dual recessionary threat: sharp inflation along with soaring energy prices driven by efforts to punish Russia for its continued invasion of Ukraine.

Germany’s cabinet approved measures on Tuesday to begin shoring up Uniper, the country’s largest importer of Russian gas, after the firm had to buy gas at significant premiums on the open market after Gazprom began curbing deliveries.

The imbalance of debt levels across the zone could also put pressure on economies like Italy right as economic engines like Germany start running rough. Those threats could force the European Central Bank to raise rates at a slower pace, in turn benefitting bull dollar bets.

In effect, the dollar bullish ETFs are a bet that the U.S.’s stronger labor market and other macroeconomic conditions will cushion recessionary effects compared to Europe, the United Kingdom, and other regions.

“I feel like coming out of the Global Financial Crisis, it was always about which is the cleanest shirt in the pile of dirty laundry, which is the nicest house in the bad neighborhood,” said Christopher Vecchio, senior strategist at FXDaily. “It feels like we’re kind of in that mindset again.”

However, Vecchio warned that the eurozone, as the world’s largest common market, is a critical trading partner to the U.S., and a slowdown in growth there has negative ramifications for both economies.