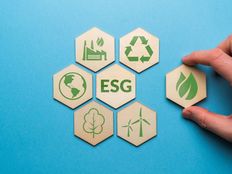 Interest and demand for environmental, social, and governance (ESG) products waxed strongly for several years but has fallen off in the last year, particularly in a changing market regime that is grappling with soaring, persistent inflation alongside rising interest rates.

“It wasn’t as important to most advisors, and we saw that not only through polls and surveys that we sent out to advisors but also flows that you saw that kind of slowed down in this area,” Lydon explained. “However, that being said, we’re focusing on this ETF today because it just had its three-year track record and, come to find out, over the three-year period starting June 26, 2019, SNPE is up 12.76% when the S&P 500 Index is up 10.85%.”

During the time period over which this was measured, energy and commodities had a major run-up — both sectors that typically are underweight to ESG.

ESG as an investment theme and broader focus is going to become increasingly important in the U.S. as regulatory frameworks are created, possibly similar to the ones that already exist in Europe, where ESG is a major focus. It remains to be seen how the SEC and government agencies will handle ESG regulation in the U.S., but they have given indications that regulation is on the horizon.

The growing awareness of ESG by investors as well as the potential future regulatory pressure and risks have begun to cause a shift within industries.

“It’s forcing all companies to up their game to make sure that their ESG ratings, if they’re not strong, that they’re corrected and they become strong and those that are strong maintain those levels going forward,” Lydon said.

Moving the Needle on the ESG Narrative

SNPE is changing the narrative on ESG investment; it has a 0.01% expense ratio and challenges the idea that ESG lenses and strategies cost more, while at the same time outperforming the broader index, Jaffe explained.

“There are a lot of people that have done very well with the S&P 500, especially coming out of the financial crisis,” Lydon said. “That being said, the S&P has pulled back like most asset classes have this year, and those FAANG stocks and the Teslas and the Microsofts collectively have underperformed the S&P.”

For advisors and investors who are looking at potentially reallocating and tax-loss harvesting some of their S&P 500 exposures, SNPE is worth considering allocating to in an environment where ESG is going to increasingly matter on multiple levels.