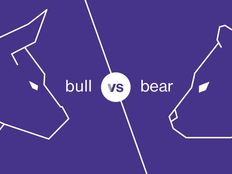 Bull vs Bear: Is The Time Right For REITs?

Bull vs. Bear is a weekly feature where the VettaFi writers’ room takes opposite sides for a debate on controversial stocks, strategies, or market ideas — with plenty of discussion of ETF ideas to play either angle. For this edition of Bull vs. Bear, Elle Caruso and Evan Harp debate the investment case for and against REITs in the current economic environment.

Evan Harp, staff writer, VettaFi: Morning. I blacked out last night and woke up with my head stuck in a jar of honey. That can only mean one thing – I’m the bear this week! (Or possibly a werebear. It was a full moon last night…)

Elle Caruso, staff writer, VettaFi: Hi, Evan! Weird! I also blacked out, and I have these horns now. Why is that curtain blowing in the wind enraging me so much? I feel the need to FIGHT… About REITs’ attractiveness in the current market environment.

Evan, you know there’s nothing I love more than a really good deal, and that’s what public REITs are offering right now. Since a REIT is essentially a basket of individual real estate investments, REIT values can drift from the net asset value of their underlying assets, leading to the REIT trading at premiums or discounts to NAV. (To learn much more about this topic, you can watch this recent VettaFi webcast on-demand.)

REITs, in aggregate, are trading at about a 20% discount to the underlying real estate value, compared to a historical average premium of about 3%. In prior periods in which REITs have traded at such significant discounts, they have gone on to generate strong absolute and relative returns, particularly when compared to private market real estate.

So considering REITs have been the top-performing asset class in eight of the past 22 years and are currently trading at substantial discounts, I think they’re a compelling investment opportunity for long-term investors.

Harp: I’m just not convinced, particularly as rising rates are making short-term bonds more attractive. There’s a reason money is coming out of the REIT space: Performance has been bad throughout the year, and let’s not forget the sword of Damocles that is the housing bubble. The last time a real estate bubble popped was in 2008, and REIT performance dropped a whopping 37.3%. It’s hard to imagine a worse outcome unless we put Elon Musk in charge of all REITs.

Now, I bring up 2008, knowing full well that that was an exceptional time for various reasons, but I think we’re also entering some exceptional times, and I just don’t see REITs as a safe play for the short- or medium-term.

Caruso: I’m going to push back on that because I don’t think there is a housing bubble to pop right now. I agree there is a housing shortage crisis, and that rising interest rates are starting to show their effects on the housing market. However, home price growth has been supported by strong housing market fundamentals and lending regulations instated due to the 2007-2008 crash. Total mortgage debt in the United States is now less than 43% of current home values, the lowest on record. Negative equity is virtually nonexistent.

As to your points about rising rates, while short-duration bonds may be more appealing now than they have been in recent years, one of the biggest reasons people invest in REITs is because they’re not bonds (or equities). REITs are portfolio diversifiers. They offer some of the benefits of bonds and equities, but they maintain notably low correlations to those asset classes.

Research from Neuberger Berman also shows that while interest rates have influenced REIT share prices in the short term, when measured over longer periods, REIT total returns historically have not tended to correlate much to interest rates. So despite rising rates, I think REITs have seen their initial period of weakness and are now poised for growth. The market expects a less hawkish Fed going forward, and that’s favorable for longer-term fundamentals. While some property sectors are more challenged than others (office, for example, is struggling, and I won’t vouch for that), overall the cash flow growth opportunities for public REITs are strong.

Harp: See, I look at that same history and see REIT’s initial period of strength as over and the space being poised going forward for erratic performance, at best.

You’re right that REITs have historically outperformed the market. Since the structure first emerged in 1972, REITs have exhibited a 13.3% total annual return compared to the S&P’s 12.1%.

I think it’s important to recognize the times when they have struggled. I brought up 2008 because, like 2008, we’re facing a housing crisis and a recession. The way the markets reformed themselves after the great financial crisis benefited REITs, and they have had a pretty good run in the past decade… But not as solid as the S&P’s. Since the GFC, REITs just haven’t kept up.

In addition, I don’t think REITs are necessarily good for homeownership. Affordable housing is a huge issue now, and REITs are part of that problem. REITs wield enormous purchasing power, and the average individual can’t really compete in a bidding war with an institutional buyer. Institutional investment puts home ownership out of reach for a larger and larger portion of the population.

Caruso: The data you’re citing goes through 2019, and I think it’s important to note that just last year – 2021 – the FTSE Nareit All Equity REITs Index increased 41.3% on a total return basis, marking its second-strongest year on record dating back to the index’s inception in 1971.

You bring up a lot of great points, Evan, but regardless of whether REITs are good or not for society, I don’t see them going anywhere. While private real estate has long been seen as an opportunity only for the wealthy, public REITs give everyone the opportunity to invest – especially in an ETF wrapper, which offers low fees and no investment minimums. This is a win for democratizing access to real estate investing, opening up an asset class previously reserved for the uber-wealthy.

One of the contributing factors to REIT’s outperformance over private real estate is the diversification available in property sectors. So far our conversation has primarily focused on residential REITs, but look under the hood at any REIT’s index, and you’ll see residential REITs are just a fraction of the whole universe.

Harp: That’s well and good, but each of these real estate sectors has its own unique risks. Climate change is going to drastically impact the global south, and that’s going to leave a lot of hotel and resort REITs with vacant, damaged, and abandoned properties, for example.

Then there are healthcare REITs. People can’t afford to not get care when they are sick or hurt, but the U.S. healthcare system itself is far more precarious than many realize. Frontline workers are leaving the industry at a rapid rate without replacement, medical services costs have skyrocketed, and hospitals are closing at alarming rates.

Retail REITs, meanwhile, are staring down the barrel of changing purchasing options and a global pivot to online shopping. E-commerce ETFs like the Amplify Online Retail ETF (IBUY C+) or the Global X E-Commerce ETF (EBIZ B) capture those trends better than a retail REIT.

Caruso: In defense of retail REITs, the pivot to online shopping has already reversed, and people are going back to in-person shopping. Anecdotally, I am tired of ordering items, unsure of exactly what I’m going to get, just to have to pay for return shipping and drive to a drop box somewhere (I might as well just drive to the store and get it right the first time!) Plus, in a world where many of us are now working from home permanently, I’ve started to appreciate my trips to the grocery store to run an errand across town – after all, some days, that’s my only human interaction that’s not through a screen. As sad as this might sound, I’m not alone!

NPR reported in July that e-commerce is only about 15% of retail sales today. Small and giant companies – think Walmart, Target, and Amazon – drastically overestimated how much people would transition to online shopping. Foot traffic to malls and brick-and-mortar stores has rebounded since vaccines and booster shots became widely available

To your points about climate change and healthcare collapse, I’d argue that’s still speculation. The facts show that as the population has access to vaccines and booster shots, more and more people feel comfortable and want to start traveling again. And healthcare, as troubled as the system may be, is still a necessity – an individual hospital might close, but hospitals as a real estate sector aren’t going anywhere.

While I agree there are compelling non-REIT funds on the market, REIT ETFs offer a few things that those offerings can’t: low correlation to equities and bonds and attractive income, as well as the potential for future growth. One real estate ETF I have my eye on is the ALPS REIT Dividend Dogs ETF (RDOG A-), which offers equal-weighted exposure to the five highest-yielding U.S. REITs within nine equally-weighted REIT segments, as well as a yield north of 4.4%.

Harp: I think there are risk factors in society that are already here and observable that make REITs an unappealing long-term buy. I hate to be such a downer, but I think a smart investor maximizes opportunity and minimizes risk. I don’t believe REITs do either. I’m keeping an eye on some of the inverse REIT funds, such as the ProShares UltraShort Real Estate (SRS B) and the Direxion Daily Real Estate Bear 3x Shares (DRV B-), which take a bearish position on the real estate universe.

Caruso: Evan, as I said, you brought up some great points, but at the end of the day, I’m all about bargain hunting and making as much money as possible, and that’s the opportunity I see here with REITs. Particularly active REIT ETFs, like the ALPS Active REIT ETF (REIT C+), in which portfolio managers can tactically maneuver the different REIT segments to capitalize on emerging opportunities and market dislocations and avoid unnecessary risk. In the last three years, 83% of active managers have outperformed their passive benchmark in the real estate sector, according to data from ALPS.

Harp: The moon is starting to rise again, but this has been a heck of a conversation. Thanks for the thoughtful debate. I hope when we both shortly transform into werebeasts once more, that we can avoid the silver bullets out there – for our own safety!

Caruso: Werebeasts next? I suppose I’ll take any form that allows me to get rid of these horns. They’ve made it rather challenging to walk through doorways.