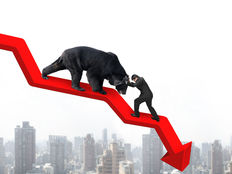 As Market Frenzy Continues, Take a Look at CXSE ETF

The capital markets showed no faith in the government response to the coronavirus thus far after Thursday’s trading session saw the Dow Jones Industrial Average experience its worst day since 1987. With the coronavirus seemingly contained in China, the government is getting praise for their response, which stands in sharp contrast to that of the U.S. and Europe.

Even with a surprise 50-basis point rate cut and the initiative to ramp up asset purchases by the Federal Reserve, it wasn’t enough to calm the stock market. The question now is whether the Fed has enough tools left amid the panic?

On the other hand, China appears at the ready to respond should the coronavirus situation change.

“We still have a lot of cards on hand, be it monetary, fiscal or industrial policies,” said Lin Qi, a money manager at Lingze Capital in Shanghai. “In a state where power is highly concentrated, you can get high efficiency as long as the decisions made are the right ones.”

The resilience of China’s market through its own share of challenges could have investors giving Chinese equities a second look, especially given the heavy volatility in the U.S. market and around the globe. In its own country, Chinese investors are already brimming with confidence for future prospects.

“Chinese stocks have languished during the 11-year run bull market in the U.S., with the Shanghai Composite up just 38% while the S&P 500 rallied as much as 400%,” a Bloomberg report noted. “China’s investors have also contended with six bear markets since March 2009, and a massive bubble five years ago where attempts to contain panic only spurred a further bout of selling. Investors were so exasperated with the record $2.3 trillion loss in 2018 that they resorted to bleak humor as an outlet.”

“Chinese traders have for years had to fend off overseas criticism about the state of the nation’s stock market,” the report added. “While risks to the current rally are growing, investors are seizing the opportunity to make some serious money — and bolster the nation’s pride.”

WisdomTree China ex-State-Owned Enterprises Fund seeks to track the investment results of Chinese companies that are not state-owned enterprises, which is defined as government ownership of greater than 20%. Learn more about the index that CXSE is designed to track.