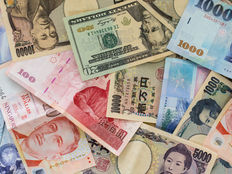 One international play on an economic rebound is the VanEck Vectors Emerging Markets Local Currency Bond ETF (EMLC A-).

Investors may have been walking on eggshells around emerging markets since the pandemic, but focusing on bonds in the current market environment is a potentially positive reopening trade.

“One area that has had a tough time over the past couple years, but which we think is poised to rebound is EM local currency,” said Ed Lopez, VanEck’s Head of ETF Product, during a call with ETF Trends.

As mentioned, EMLC is also an option.

“For the same reasons: it’s reflation, it’s stronger growth, you do get the higher yield," said Lopez.

EMLC seeks to replicate as closely as possible the price and yield performance of the J.P. Morgan GBI-EM Global Core Index. The fund normally invests at least 80% of its total assets in securities that comprise the fund’s benchmark index.

Is History on the Side of Emerging Markets Currencies?

When looking at how local currencies have done in the past, Lopez noted that things have been great during times of reflation. On the flip side, fears of inflationary pressure have been on investors’ minds as of late, causing the markets to expect rate hikes from the Federal Reserve.

However, Lopez doesn’t think we’re quite there just yet. Nonetheless, when it does finally happen, EM local currency stands to benefit as recent history shows that between 2004 to 2007, the Fed hiked rates 16 times and EM local currency was up 60%.

Then, in 2015, EM local currency was up again 30% while the Fed was hiking rates nine times. Paradoxically, one common assumption is that rising rates hurt international currencies.

Lopez noted that stronger growth means the U.S. is importing more goods, which benefits the economies of EM countries and in turn, their currencies. This also goes for reflationary periods when stimulus money is helping to prop up the U.S. economy.