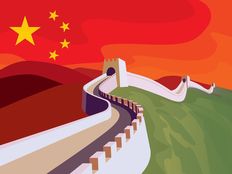 As China’s Internet market, which is already home to more users than there are people living in the U.S., continues expanding, digital advertising expands as well. That theme is expected to benefit some of the marquee Chinese Internet companies and some exchange traded funds with exposure to those stocks.

The O’Shares Global Internet Giants ETF (OGIG) is one of the newer options among Internet exchange traded funds, but unlike its domestically-focused rivals, OGIG features exposure to Chinese Internet companies.

Some of OGIG’s top portfolio holdings includes companies such as Alibaba, Amazon, Facebook, and Alphabet, each of which represents 6- to 6.5-percent of the overall portfolio. Also among the index’s 52 holdings are Chinese tech companies like YY, Baidu, 58, and JD. For long-term investors, OGIG’s exposure to ex-US e-commerce and Internet companies is relevant and important

A mix of Chinese stimulus measures have been providing the fodder for economic growth, such as lower taxes, no corporate tax breaks, monetary policy adjustments, and more market access for foreign companies to set up shop. All in all, Wall Street is looking at the Chinese government’s latest efforts as a plus for its economy and a boon for China ETFs.

The digital advertising market in China is expected to undergo exponential growth over the next several years.

Data confirm that much of the exciting Internet growth is taking place outside the U.S.

“Asia and Africa, on the other hand, have populations exceeding 4 billion and 1 billion, respectively, accounting for over 70% of the world’s population but have much lower adoption rates. Only half of Asia is online and that proportion drops to nearly a third for Africa. As Internet adoption rates in Asia and Africa converge with developed markets, growth in Internet and e-commerce will likely follow suit,” according to O’Shares.

OGIG allocates about 13% of its combined weight to Tencent, Alibaba (BABA) and Baidu.com (BIDU) .

“The top 3 companies, which include Baidu, Alibaba and Tencent, represented an estimated 60% of the market in 2017,” according to O’Shares. “As the digital trend continues, these 3 companies may end up as big winners.