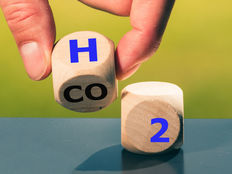 Get Exposure to Hydrogen Power With This ETF

Getting renewable energy exposure doesn’t have to be a broad play with thematic exchange traded funds (ETFs) focusing on specific sub-sectors like hydrogen power.

The renewable energy play can be sliced and diced into various opportunities, from solar power to wind power to even nuclear power. One clean energy play that investors can also capitalize on as the world moves to reduce its carbon footprint is hydrogen power.

Hydrogen represents the most abundant substance in the universe, allowing for energy creation via heat. Because it doesn’t release any carbon dioxide, it represents an emissions-free option.

“In my travels around the world I can’t name a country that hasn’t expressed excitement about hydrogen," said John Kerry, special presidential envoy for climate, at the Department of Energy’s Hydrogen Shot Summit last August. “From Saudi Arabia to India to Germany to Japan we’re setting up hydrogen partnerships around the world to advance this critical technology that every country understands has the opportunity to play a vital role in the clean energy transition.”

An ETF for Hydrogen Exposure

For investors looking to capitalize on the potential growth exposure of hydrogen-powered energy, there’s the Global X Hydrogen ETF (HYDR). Investors can also get diversified exposure with the ETF focusing on countries outside of the U.S. (which comprise over 40% of the fund focus, as of December 31) such as the U.K. and Canada, which round out the top three country allocations.

The fund seeks to invest in companies that stand to benefit from the advancement of the global hydrogen industry. This includes companies involved in hydrogen production, the integration of hydrogen into energy systems, and the development/manufacturing of hydrogen fuel cells, electrolyzers, and other technologies related to the utilization of hydrogen as an energy source.