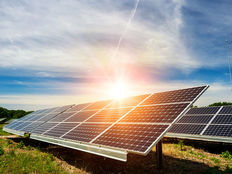 Renewable energy got a boost in 2021 thanks to the trillion-dollar infrastructure package that was signed into law in the fourth quarter.

As such, the Morningstar North America Renewable Energy index jumped over 15% in November and is up 7% for the year. Even before the infrastructure package gave green energy that added boost, the sub-sector was already seeing strength, which should continue into 2022.

“It’s safe to say that in general green energy and green energy stocks are in a long-term bull market,” an Investor Place article notes. “As time goes on, people everywhere are becoming increasingly conscious of a greener economy and environmentalism at large.”

Climate-related issues are coming to the forefront of renewable energy discussions globally. In the U.S. specifically, that is already being addressed with the increased prevalence of electric vehicles, and even more will be on the road with government subsidies.

“The recent United Nations global climate summit in Glasgow is a great example of green energy and the market,” the article adds further. “For some, claims that COP26 was our ‘last, best hope’ ring a bit too alarmist. But, in any case, the positive news is that at the conference, industry leaders and heads of state showed up in force. Their promises to take action show that climate issues have the market’s attention. That’s a strong sign for the sector.”

Investors looking to capture continued growth in renewable energy can look to an ETF like the Global X Renewable Energy Producers ETF (RNRG B). The fund seeks to track the price and yield performance of the Indxx YieldCo & Renewable Energy Income Index.