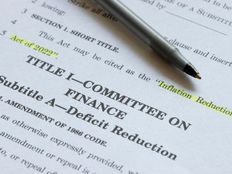 This ETF Might Benefit From the Inflation Reduction Act

On its surface, the newly signed Inflation Reduction Act might appear to do just that — help to reduce inflation. However, upon closer examination, there are a number of government subsidies aimed at reducing the country’s carbon footprint, thereby putting renewable energy sources in focus.

“The 755-page legislation touches on a plethora of issues, including healthcare, prescription drugs and stock buy-backs and it raises nearly $800 billion from multiple resources,” a World Economic Forum article noted. “Its provisions pertaining to climate change mitigation, clean energy and energy innovation, however, dominate the headlines.”

“The $369 billion earmarked for clean energy and climate change mitigation initiatives is an unprecedented level of support from the US Federal Government for the transition to sustainable energy,” the article added further. “It is expected that the Act will reduce US GHG emissions to approximately 40%, compared to 2005-levels, by 2030. Without the enactment of the IRA, the US was on course to reduce its GHG emissions to only 26%, compared to 2005-levels, over this period.”

This emphasis on renewable energy opens up the pathways for investment. While there are a number of companies investors can look at, there are easier ways to get broad exposure.

Exchange traded funds (ETFs) have a plethora of options to play renewable energy. While investors can opt for funds that focus on specific sources, such as wind or solar, they can also get broad exposure in one fund: the Global X Renewable Energy Producers ETF (RNRG B).

RNRG seeks to track the price and yield performance of the Indxx YieldCo & Renewable Energy Income Index. The underlying index is designed to provide exposure to publicly traded companies that produce energy from renewable sources, including wind, solar, hydroelectric, geothermal, and biofuels (including publicly traded companies that are formed to own operating assets that produce defined cash flows).