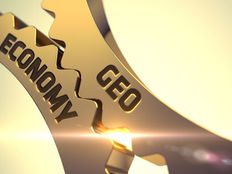 2016 was a challenging year for investors, as seismic events in the global political economy clouded our ability to predict market behavior. The next 12 months will see a continuation of those risks and likely the escalation of much more, as policymakers contend with uneven growth, political instability and the rise of populism. For exchange-traded funds (ETFs) investors, understanding how geopolitical risks scale with the influence of countries or regions affected is critical for driving a successful portfolio.

The magnitude of geopolitical risks is usually defined by the influence of the country or region affected. For example, geopolitical risks impacting the U.S., which controls 20% of global domestic product (GDP), will have a bigger affect on investment returns than most other countries.

In today’s environment, political risks take on many forms and exist for various reasons. Chief among them are changes to foreign or domestic policy that could impact economic relations, lead to sanctions or even military conflict. Recent geopolitical events, such as U.S. involvement in the Middle East and escalating tensions between Saudi Arabia and Iran, are largely the result of foreign policy.

Uncertainty following the election of a new leader or outcome of a referendum also carry significant geopolitical risks.

This was clearly the case last June when the U.K. voted to leave the European Union in a shocking referendum. Uncertainty about upcoming elections in France, Germany and the Netherlands could also create political risks related to the future of the EU, which has a direct effect on equity returns and the performance of national and regional currencies.

In all these cases, political developments are deemed risky for their actual or potential impact on nations, governments and societies. For investors, “potential” risks are just as worrisome as actual developments, since they bring with them the threat of uncertainty. As history has tirelessly demonstrated, uncertainty is the bane of the financial markets.

Brexit was arguably the biggest geopolitical risk of 2016 because it created uncertainties about U.K.-EU trade relations and the future of the single market itself. The referendum was so shocking that it triggered a $3 trillion selloff in global equities, the biggest loss on record. To read more about the market’s response to Brexit, read Trending on ETFdb.com: Brexit Bombshell Spurs Global Selloff and Run to Safety.

The constant threat of war in the Middle East has routinely impacted investor sentiment concerning the supply of oil. Violence in and around major oil-producing regions could disrupt vital crude supplies that keep the global economy running. During the height of the Arab Spring, oil prices rose due to disruption fears.

In these and other examples, geopolitical risks impacted economic relations between countries and regions. One of the best recent examples is the deteriorating relationship between Russia and the West. The United States and E.U. have imposed economic sanctions on Russia for its alleged role in destabilizing Ukraine. This has raised protectionist attitudes and produced greater regional instability with Russia and the U.S. taking opposing sides of the Syrian war and other geopolitical issues.

You can learn more about investment sentiment by reading How to Gauge Risk Appetite with ETFs.

For many, 2017 will be synonymous with geopolitical risks. Below are the six biggest hotspots that could roil the financial markets.

The British government is pushing for a “hard” Brexit from the EU All that’s left is for Prime Minister Theresa May to trigger Article 50 of the Lisbon Treaty, the formal mechanism that kicks off two-year negotiations with Brussels. In late January, Members of Parliament (MPs) voted in favor of giving the Prime Minister the power to trigger Article 50 and begin negotiations for the UK to leave the European Union.

High-profile elections in France, Netherlands and Germany will be on every investor’s risk registry, as populist movements in each country look to close borders and redefine their relationship with the EU Marie Le Pen in France, Geert Wilders in the Netherlands and Germany’s AfD party all want to stem migration and control national borders. They are also highly critical of the EU, a sign that more populist referendums could be on the way.

An emphasis on European dividend growers might be the way to go during the elections. This puts (EUDV B-) and (EFAD B) on the radar. Compare these dividend ETFs using our Head-to-Head ETF Comparison tool, which allows you to analyze along various criteria, such as performance, AUM, expenses and trading volume, among others.

The election of Donald Trump has raised warning signs of a potential rift between the U.S. and China over free trade. Trump has vowed to renegotiate Washington’s trade deals, and China doesn’t appear happy. Combined with recent efforts to devalue the yuan, Beijing could be looking at a more assertive trade policy in 2017. The world’s second largest economy has seen its trade picture deteriorate in recent years amid weak global growth. A more competitive yuan may provide a short-term catalyst as the government steps up efforts to realign the economy toward consumption and services.

In the face of such a potentially large standoff, investors may want to consider volatility ETFs such as the (VXX A-) and (TVIX C+) because negative U.S.-China headlines are sure to rock the equity markets.

Italian Prime Minister Matteo Renzi’s swift resignation following the failed referendum on constitutional reform opened the door wide open to the Five Star Movement, a right-wing party determined to push Italy out of the euro area. Italy is still in a period of transition, with the next elections slated for 2018. President Sergio Mattarella will call the shots until a new election is held.

In the meantime, heavy exposure to Italian stocks probably isn’t a good idea. Even with a prime minister, Italy is mired in a worsening financial crisis, with the country’s banks holding about one-third of the Eurozone’s non-performing loans. Investors looking for moderate exposure in Italian stocks that mirror the performance of broader European small cap equities should consider (EUSC B), where Italian companies account for 20% of the fund’s assets.

Investors looking for above-average risk-adjusted returns may also want to consider (FEUZ C+), where Italian stocks comprise 12% of the fund.

South Korea’s next presidential election is scheduled to occur on Dec. 20, about one year after President Park Geun-hye was impeached over a corruption scandal. In the interim period, South Korea doesn’t just face internal instability, but a major threat from its neighbor to the north.

Prime Minister Hwang Kyo-ahn, who is currently serving as the acting President, has warned that North Korea could use the political upheaval to stir up chaos in Seoul. He has advised the military to be on high alert. (KORZ ), a leveraged bearish bet on South Korean shares, could come in handy should domestic stocks buckle under the weight of the instability. On the flipside, (EWY B) offers large exposure to South Korean markets, and could be a solid play should President Park’s impeachment lead to hopes of a better future.

With Russia and the U.S. taking opposite sides of the Syrian conflict, and with Saudi Arabia and Iran butting heads over regional ambitions, the Middle East will continue to be highly explosive in 2017.

However, for investors, the main source of volatility will be OPEC’s adherence to proposed production cuts.

Any sign member states are cheating will lead oil prices sharply lower. In the event oil prices turn south, investors will be glad they were exposed to (SZO B), an inverse commodity ETF that tracks the opposite movement of oil. On the flipside, continued adherence to the production deal will keep oil prices elevated. (UCO A), which provides leveraged exposure to crude oil, might be good for short-term spikes.

By signing up for the ETF Edge, not only will you stay updated on upcoming geopolitical events, but also on major portfolio-moving developments around the world.

How to Navigate Geopolitical Risks

Investors looking to safeguard their returns against political risks can choose to either stay out of the market entirely or find ways to navigate through the volatility.

Avoiding the market during heightened periods of instability is the safest option; if you are not actively investing, there’s no way to lose money when a major political crisis hits. However, that safety comes at a premium, since exiting the market entirely is a big opportunity cost.

The second and perhaps best option is navigating through market volatility by adopting a conservative risk management strategy and employing some of the ETFs discussed in the previous section. While this strategy is riskier than staying out the market completely, volatile market conditions also produce rare opportunities for profit. One of the best examples is volatility.

A leveraged volatility ETF, such as (VXX A-), is an excellent tool during periods of heightened political risks that produce uncertainty in the market. In the case of Brexit and the equity market crash of early 2016, volatility was an excellent play.

The balance of risks facing the market in 2017 strongly suggests that instability will only increase in the short-term. For investors, the difference between a winning portfolio and a losing one is knowing how to anticipate and manage instability. Investors who understand these risks and hedge against them effectively can shield their investments against all the world’s troubled spots.