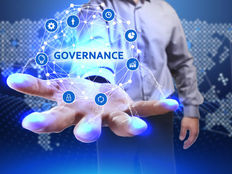 Since the 2008 financial crisis, market participants have acted increasingly on the realization that indexing strategies are superior to investing in individual stocks or actively managed funds. This has led to an explosion in so-called passive investment strategies, resulting in more concentrated power for the major investment institutions. The numbers certainly don’t lie. Between 2008 and 2015, investors moved $1 trillion into passively managed funds. As a result, passive institutional investors such as BlackRock, State Street and Vanguard wield a heavy hand in Corporate America.

This massive shift in assets from active to passive investment has had a profound impact on publicly-listed companies in the United States and internationally. For starters, the major investment institutions have become more vocal about corporate governance, and have sought to increase their role in the decision-making process. At present, 88% of public companies count on BlackRock, State Street or Vanguard as their largest investor. These institutions are using the power of voice to exert shareholder influence on everything from management to corporate governance.

As index funds have grown their holdings dramatically, the managers that run them have greater incentive to become more assertive. As Bruce Goldfarb of Okapi Partner rightly puts it, the funds have a long-term stake in the companies they are invested in – a ‘built to last’ position that urges them to get involved in corporate governance. Although not everyone agrees that passive investors play a key role in corporate decisions, their influence isn’t that hard to see. They may not be able to create value, as in the case of more active management positions, but they can certainly promote more investor-friendly policies or instill board members they feel are more beneficial to the business.

ETF investing is all about diversifying your portfolio. To learn about how smart-beta strategies can help you navigate the market cycle, refer to the following article.

That passive fund managers are more involved in corporate activism wasn’t always apparent. It wasn’t until a 2015 paper, “Passive Investors, Not Passive Owners,” that market participants were clued in about the power of passive fund managers. The paper shed light on how passive mutual fund managers use their clout to press for change at the shareholder level. In a follow-up paper titled, “Standing on the Shoulders of Giants: The Effect of Passive Investment on Activism,” authors Ian Appel, Todd Gormley and Donald Keim showed that passive investing leads to more aggressive shareholder activism.

The researchers calculated that roughly 400 activist campaigns are launched annually, a figure that has risen dramatically in recent years. Activists have not only become more ambitious in their goals, they’ve had more success meeting their demands. Whether it was getting more outsiders on corporate boards or changing internal policies, activists are getting what they want. Given that passively managed mutual funds have quadrupled their ownership stake in the U.S. equity markets over the past 15 years, their influence appears to be growing in lockstep with corporate activism.

The data certainly corroborates this. The researchers’ earlier paper showed that firms with more shares owned by passive investors had more independent directors. The researchers also observed more proxy fights when passive ownership is prevalent. Moreover, firms with more passive ownership are more likely to be the target of activist campaigns to replace board members. They are also more likely to have developed extensive in-house governance groups, especially among firms that are controlled by the larger passive institutions.

The recent proxy battle for control of metal-parts company Arconic, which spun off from Alcoa in 2016, demonstrates the impact of proxy wars in companies controlled by passive managers. In January 2017, Elliott Management Corp., which owns a roughly 13% stake in Arconic, nominated new directors to the board after voicing displeasure with management’s dismal performance. Corporate behemoths like Exxon Mobil Corp, Apple Inc., Hewlett-Packard and Occidental Petroleum Corp have all been impacted by activist investors in recent years.

Easily find ETFs for your personalized investing needs. Utilize our ETF Screener tool to filter through the entire ETF universe ETFs by dozens of criteria such as asset class, sector, region, expense ratio and historical performance.

Passive Investing Strategies on Track for a Solid Year

Passive investing strategies such as exchange-traded funds (ETFs) have enjoyed resounding success this year. Funds that aim to mirror the performance of a single sector or index have been extremely popular for their steady returns and low fees. As a result, it is widely estimated that ETFs will purchase $300 billion in stocks this year, which is more than 2015 and 2016 combined.

Some of the most successful ETFs of 2017 have included the following:

Passive investing is not expected to slow anytime soon as more investors seek out the benefits of broad-based indexing strategies. Investors are under growing pressure to reduce expenses, diversify their investments and create a tax portfolio. These goals are best achieved with a passive investment strategy.

While the benefits of ETF investing are well known, there are hidden risks and costs associated with this asset class. To learn more about these potential downsides, read: The Hidden Risks and Costs of ETFs.

The major investment institutions are reshaping corporate America. As their influence grows, their impact on corporate governance will become more apparent.