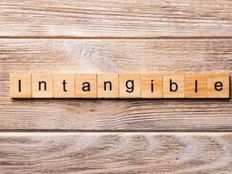 Intangible value is the value of a company derived from its intangible assets, says Sparkline founder and CIO Kai Wu.

“Intangible assets have been steadily rising in importance as the economy transitions from industrial to asset-light,” he told ETF Trends. “Today’s dominant firms no longer rely on tangible assets, but depend instead on intangible moats.”

“While so-called ‘style boxes’ attempt to categorize managers as either value or growth, we believe this is a false choice,” said Wu in an interview with NYSE Arca’s Issuer Spotlight. “Warren Buffett has argued that ‘value and growth are joined at the hip.’ In other words, intrinsic value should take into account companies’ growth prospects. Similarly, ITAN attempts to integrate these two philosophies into a single framework that incorporates the intangible drivers of growth while still keeping an eye on valuation.”

The four pillars that create the intangible value framework for the ETF are intellectual property, brand equity, human capital and network effects.

Intellectual property is defined in the prospectus as including legally-protected patents and proprietary trade secrets and within the technology industries has become one of the most valuable assets for companies.

Brand equity acknowledges that well-known brands sell better, and that companies might invest a large portion of its resources to building brand recognition and increase their market value.

The human capital component focuses on a company’s ability to attract and retain talent, as well as creating a culture that cares for the workers.

Network effects are the moat that companies are building around themselves with their market positions and is made up of the value that users of that network get from adding other users to the network.

These four components are assigned a value using proprietary quantitative methodology and machine learning, and are combined with the fifth element, the company’s tangible assets, to assign a final score to a company. Only the top scoring companies are included in the fund from the largest 1,000 publicly listed U.S. securities by market cap.

“We have begun to see many other famous value investors embrace the notion that value needs to be adapted for the rise of the intangible economy. We believe this modern interpretation of value principles will ultimately bear fruit, providing an anchor of value in a world increasingly rife with speculation,” said Wu.

“By building upon timeless value investing principles, we hope to offer a portfolio of high-quality, modern companies without sacrificing our margin of safety,” said Wu.

Midstream Company Positions Ahead of Earnings

The Case for Value Investing as Markets Bounce Off Lows

With Yields of 8.8%, High Yield Deserves Its Moniker

Beyond the K-1: Tax Treatment for an MLP Fund