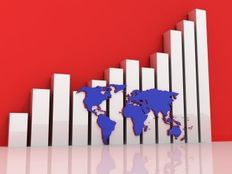 Global investors sold off $40 billion worth of emerging-market stocks and bonds during the third quarter of 2015 alone, according to the Institute of International Finance. At the same time, the International Monetary Fund (IMF) warned that emerging-market corporate debt of nonfinancial firms quadrupled between 2004 and 2014 from $4 trillion to $18 trillion. This could create problems for dollar-denominated issues when interest rates are hiked in the United States.

Of course, Baron Rothschild famously said, “The time to buy is when there’s blood on the streets.” Meaning that massive sell-offs may create massive buying opportunities.

According to BlackRock, emerging-market governments have accumulated less dollar debt, built up foreign reserves, and adopted flexible exchange trades to combat the potential rise in U.S. interest rates. Governments and companies holding dollar-denominated debts will certainly feel the pain when interest rates rise, but many analysts agree that they will be able to weather the storm and continue paying down their bills through the slowdown.

The sell-off of emerging-market bonds has also led to lower prices and higher yields, creating an attractive opportunity for income investors. For example, EMB and PCY offer yields of 4.77% and 5.25% respectively, which is far greater than the Vanguard Total International Bond ETF’s (BNDX A-) 1.47% yield.

Emerging markets tend to be grouped together, but there are some important differences between the various economies and types of bond ETFs. For example, while Brazil’s debt recently descended into junk status, South Korean bonds remain highly rated as the country’s economy maintains its growth. Dollar-denominated bond ETFs also have a far different risk profile than local currency bond ETFs, given the fluctuation in the dollar and emerging-market currencies.

The WisdomTree Emerging Markets Local Debt Fund (ELD B-) may be trading down more than 17% so far this year, but its dividend yield has reached an attractive 5.93% as of September 29, 2015. With an active management structure, the fund is focused on fiscal sustainability, minimizing external vulnerability, and analyzing geopolitical risks to invest in emerging-market bonds that may have less risk than broader index funds.

Investors can learn more about the exposure of individual emerging-market bond ETFs by reading their prospectuses, but keep in mind those countries facing the greatest troubles when it comes to debt affordability. For instance, significant exposure to Brazil could be problematic given that the country’s debt was recently downgraded to junk status by several sovereign ratings agencies.

The most important consideration for those looking at emerging-market bond ETFs is ensuring proper diversification on an ETF and portfolio level.

Emerging-market bond ETFs should be well diversified across many countries in order to avoid problems when a single country experiences a debt crisis. Ideally, the diversified exposure would steer clear of troubled emerging markets that have well-documented issues. On a portfolio level, emerging-market bond ETFs should only be a small part of greater exposure, potentially representing either a portion of fixed income or target exposures.

Watch This ETF as Copper Prices Begin to Fall