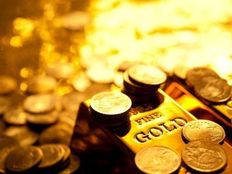 How to Lose $800 Million with ETFs

Over the years there have been a number of complaints about investors losing money using ETFs; the vast majority of complaints stem from those who did not fully understand the product or had no business buying in the first place (see leveraged ETFs). But every once in a while an ETF and its underlying asset endure a sharp correction, leaving someone on the losing end of a very large trade.

That is exactly what happened over a period stretching from 2012 to 2013, as a high profile investor watched his position take a nosedive.

John Paulson and the $3 Billion Bet

From 2000 to 2011, gold made an historic run as the commodity entered a relentless bull market that saw it peak at more than $1,900/oz. Since its inception in 2004, the SPDR Gold Trust (GLD A-) has been a major beneficiary of that trend and has only had one negative annual return (2013).

Given its handsome returns prior to gold’s correction, GLD established itself not only as one of the most popular ETFs, but also as one of the most popular securities available on the market. During this time, the fund caught the eyes of major hedge funds and high profile investors such as George Soros and John Paulson. But it was Paulson who was left on the receiving end of GLD’s collapse.

At the end of Q2 2012, Paulson revealed that he owned 21.8 million shares of GLD. At a price of approximately $151.05, that investment was worth $3.29 billion, an astounding 44% of his equity assets; a definite no-no as far as diversification standards are concerned.

The fund would make a run high over the next few weeks, peaking at $173.61, a jump of 14.94%, and creating unrealized gains of $491 million. Not too shabby for a few weeks’ work. But the ETF would start on a downtrend for the remainder of the year, carrying through Q1 2013, as the chart below displays [see also Free Lunch on Wall Street: 21 Ways Investors Can Make (and Keep) More Money].

Then came the correction. At point 2 on the timeline above (4/11/2013) FOMC minutes suggested an early end to QE and combined with gold breaking a key support level to send the precious metal down 13% in just two trading sessions.

Though GLD bounced back during the following few days, it cratered yet again, hitting a low point at the end of Q2 2013. At that point, GLD was sitting at $119.11 and Paulson was staring at unrealized losses of nearly $800 million. He also revealed that over the previous quarter he sold 11.57 million shares of GLD, cutting his position virtually in half.

A Lesson in Portfolio Management

For someone like Paulson this bet was an attempt to outperform the market for his hedge fund’s purposes; it would be an extremely risky and often foolish choice for an individual investor to make. The stats vary, but somewhere between 60% and 80% of active managers fail to beat their underlying index each year. Investors should keep in mind that simply keeping up with the markets is a perfectly effective strategy over the long haul [see also 101 ETF Lessons Every Financial Advisor Should Learn].

Rather than spending more effort and energy on trying to beat the market (something that professionals fail to do more often than not), investors should focus on a solid, diversified strategy for their objectives and time horizon. A bit of a gamble now and again is certainly fine, but if you have nearly half of your assets in something as volatile as a commodity (or worse, a leveraged fund) it may be time to re-think your strategy before you get burned. There is nothing wrong with a conventionally “boring” or plain portfolio. In the long run, it will suit you better and will often outperform those trying to find alpha.