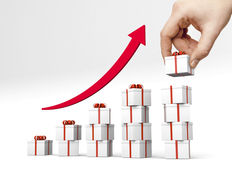 What ETF Investors Need to Know About the January Effect

The January Effect refers to a seasonal anomaly in the market associated with stocks rallying to kick off the new year.

This article takes a deeper dive into the reasons behind the stock market’s seasonally bullish tendency during the first month of the new year, commonly known as the January Effect, and how to play it with ETFs.

There is a plethora of other seasonal tendencies you can trade with ETFs; learn more about some of them here.

What Is the January Effect?

First publicized in 1942 by Sidney Wachtel, the January Effect was originally based on the notion that small-cap stocks have historically outperformed their larger-cap counterparts during the first month of the year.

More recently, the January Effect has expanded beyond small-caps; it also refers to the outperformance of the past year’s laggards during the first month of the new year. There are a few reasons that may explain this phenomenon, which we’ll discuss below.

First let’s examine the historical merit of the primary definition of the January Effect, that is, the outperformance of small-caps. Consider the following one-year seasonal pattern, comparing the returns of small-caps, as represented by the well-known Russell 2000 Index, versus their larger-cap cousins, as represented by the Russell 1000 Index. The chart below is courtesy of the Stock Trader’s Almanac, the authority on seasonal trading:

The key observations here are:

Now let’s examine the why behind this seasonal tendency.

What Drives the January Effect?

There are two key reasons often cited when explaining the January Effect:

In short, the biggest losers from the current year often get hit even harder in the final trading days of December as portfolio managers scramble to optimize returns before the end of the year.

Investors will rush into buying these artificially depressed securities in January because they are trading at bargain prices. The result: the biggest losers from the prior year will outperform the broad market in January as money flows back into these beaten down stocks following (often) overexaggerated declines.

If you expect to make a killing just by buying the biggest losers from the prior year and holding them in January you’re likely to be disappointed. While this may have been the case 50 years ago, now that this seasonal anomaly has been well-publicized for a while the arbitrage opportunity has deteriorated in recent years; that is to say, the January Effect hasn’t been as pronounced in recent years as it has been in the past.

The CBOE offers a detailed explanation of this shifting dynamic here.

There are a number of ways to play the January Effect. For starters, investors may wish to overweight exposure to smaller-cap securities by opting for any of these types of products:

Alternatively, investors may also wish to target the prior year’s biggest laggards in hopes that they will outperform in the new year. One way to start this research is using the ETF Database Screener:

Developing a trading strategy based around seasonal tendencies requires more than just precise timing; you must evaluate the current conditions and determine whether or not the historical tendency you are chasing is likely to persist this time around. Remember, there’s no such thing as a “free lunch” on Wall Street.