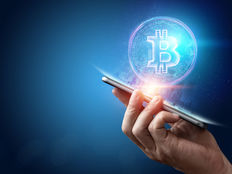 During the past few weeks, domestic and global events have brought further attention to cryptocurrencies. Both Russia and Ukraine have increased applications of cryptocurrencies since Russia’s invasion, which has highlighted some of the use cases for crypto (e.g., faster, more efficient transfer times and relative stability compared to fiat currency during times of conflict). Meanwhile, as cryptocurrency takes off domestically, the U.S. has initiated a framework for digital assets that could be supportive for crypto-related companies, while also facilitating broader adoption of digital assets. These developments have broad implications for the cryptocurrency landscape, as well as the constituents of the Alerian Galaxy Global Blockchain Equity, Trusts & ETPs Index (BCHAIN) and Alerian Galaxy Global Cryptocurrency-Focused Blockchain Equity, Trusts & ETPs Index (CRYPTO). More details on these key takeaways from March are below:

Russia explores crypto as a means to avoid foreign manipulation. Western governments, including the U.S., froze Russian central bank assets and placed economic sanctions on the country. In response, the Russian Ruble (RUB) has already seen a rapid devaluation from the economic downturn. Previously before the conflict escalated, one U.S. dollar (USD) was worth an average of 75 RUB—reaching as much as 135 RUB per USD in early March.

Ukraine uses crypto as a fast, efficient payment system. On March 17, Ukraine signed a bill which legalized crypto. Ukraine has raised over $100 million in cryptocurrency donations since the Russian invasion a few weeks ago, including over $60 million donated directly to the government’s official donation fund.(3)


In March, interest rate concerns brought some volatility to riskier crypto-related equities. But in the long run, there seems to be several emerging factors which are supportive of the digital asset environment including the U.S. cryptocurrency executive order, Ukraine’s legalization of crypto, and Russia’s move toward digital assets.


Investing in the Digital Transformation: Accessing Blockchain and Crypto Through Equity Investments