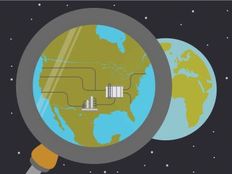 The dramatic growth of US oil and natural gas production over the last decade has transformed the US energy landscape by reducing our dependence on coal for electricity generation and exponentially increasing energy exports. Another transformation is underway as power providers and policymakers prioritize low-carbon energy in order to combat climate change. Some traditional oil and gas companies, including a handful of midstream companies, are responding to this shift by incorporating renewable energy into their businesses. Today, we discuss the anticipated move towards renewable energy and how oil and gas companies are adapting to the long-term shift in the industry.

Renewable energy capacity is expected to grow significantly over the next few decades.
While fossil fuels still dominate the energy landscape and will likely continue to do so for years to come, renewable energy usage is expected to see significant growth both globally and in the US. In the International Energy Agency’s (IEA) World Energy Outlook 2019, low-carbon sources, led by solar, are expected to account for more than half of global energy demand growth through 2040 under the Stated Policies Scenario, which incorporates stated government policy intentions and targets. In this forecast, natural gas is expected to account for another third of global growth. The growth of renewables is even more notable under the IEA’s Sustainable Development Scenario, where the emissions goals set under the Paris Climate Agreement are met. As seen in the chart below, global renewable electricity capacity is expected to grow by 4.9% and 6.8% annually from 2018 through 2040 under the Stated Policies and Sustainable Development Scenarios, respectively. In both cases, capacity additions accelerate after 2030. In its 2019 Energy Outlook, BP (BP) projected that 85% of primary energy growth through 2040 will come from renewables and natural gas in a scenario that assumes energy policies and preferences continue to develop at recently observed speeds.

Focusing exclusively on the United States, the US Energy Information Administration (EIA) is projecting similar trends in renewable growth domestically. As seen in the chart below, renewable energy, which includes solar, wind, geothermal, hydroelectric, and other sources of low-carbon energy, accounted for roughly 19% of electricity generation in 2019, less than natural gas, nuclear, and coal. However, by 2050, renewables are expected to represent the largest portion of the US energy mix at 38%. Solar is expected to represent a significant portion of this growth, increasing from 15% of the renewables mix last year to 46% in 2050. While the EIA forecasts that natural gas will make up roughly the same portion of the electricity mix in 2050 that it does today, nuclear and coal will lose share to renewables.

Despite the substantial growth in renewables usage in both the IEA and EIA forecasts, fossil fuels are expected to maintain notable market share over the next few decades. Under the IEA’s Stated Policies assumptions, global natural gas demand is projected to grow by 1.4% annually through 2040. The Stated Policies scenario also forecasts a 0.4% annual growth in oil demand through 2040. Oil demand growth is expected to slow in the 2030s after crude oil use in passenger vehicles reaches a peak, but overall demand will continue to be driven by petrochemicals, trucking, and jet fuels. Even when factoring in an accelerated transition to low-carbon energy under the Sustainable Development Scenario, global natural gas demand is still expected to increase through 2030 and is estimated to only be 2.5% below 2018 levels in 2040. In the US, the EIA is forecasting that coal and natural gas will represent nearly half of all electricity generation in 2050, demonstrating the long-term importance of fossil fuels despite the increase in renewable energy use.

Renewables are beginning to gain traction with oil and gas companies beyond the integrated majors.
The integrated majors — companies like BP, ExxonMobil (XOM), Shell (RDS.A) and Total (TOT) — have long been investing in alternative energy through renewable projects, research and development efforts, or backing startups developing new technologies. Increasingly, renewables are gaining traction beyond the majors. The table below highlights traditional oil and gas companies that have ventured into clean energy. Note that this table is not inclusive of all examples of alternative energy investments in the industry and only highlights a few key examples. Renewable initiatives among these companies include solar and wind projects, biofuels research, and production of renewable fuels. The three refiners included, Delek (DK), HollyFrontier (HFC), and Valero (VLO), focus on renewable fuels, including biodiesel, renewable diesel, and ethanol. Increased adoption of biofuels in the US has been supported by the Renewable Fuels Standard, with refiners obligated to blend increasing volumes of renewable fuels or acquire credits to achieve compliance. Last week, HFC announced that it would be converting its Cheyenne Refinery to renewable diesel production and will construct a pre-treatment unit at its Artesia Refinery that will process feedstock for its renewable diesel plants. Once the Cheyenne conversion project is complete in 1Q22, HFC will have combined renewable diesel production capacity of over 200 million gallons per year. (For context, 200 million gallons a year equates to just over 13,000 barrels per day. US diesel demand in 2019 averaged just over 4 million barrels per day.)

How is midstream getting involved?
Given that energy infrastructure companies typically do not sell fuel or power, the opportunity set for getting involved in renewables is perhaps more limited than it is for oil majors and refiners. However, several midstream companies have still found ways to incorporate renewables into their businesses.  Enbridge (ENB) is a standout in this regard given its large portfolio of wind assets, complemented by a relatively smaller interest in solar facilities. The company has a combined net zero-emission capacity of roughly 1,991 megawatts (MW) in North America and Europe. ENB has interests in North American wind facilities representing nearly 1,400 MW of capacity. ENB also has interests in three operational offshore wind farms in Europe and four offshore wind projects in development. Last week, construction began on the Fécamp Offshore Wind Farm, a joint venture between ENB (35% interest), EDF Renewables (35% interest), and wpd (30% interest). The 500 MW wind farm off the northwest of France is expected to begin commissioning in 2023.

Other midstream companies have adopted renewables in a more indirect fashion. Energy Transfer (ET) signed its first solar-dedicated power purchase agreement with Canadian Solar’s (CSIQ) subsidiary, Recurrent Energy, last June. Inclusive of this agreement, more than 20% of electrical energy purchased by ET to power its facilities comes from wind or solar sources. More recently, Williams (WMB) announced that it would be installing solar panels at its facilities across nine states to power its existing natural gas transportation and processing activities. Once the installations are placed into service in late 2021, any excess power generated over the 400 MW typically used by WMB’s facilities can be sold back to the grid. While these are modest steps, they show that midstream companies are not aloof to the importance of environmental stewardship and the long-term shift towards renewables.

Bottom line
Just as oil and natural gas continue to dominate the overall global power mix, they remain the main profitability drivers for traditional oil and gas companies. However, as renewables are expected to gain wider adoption over time, traditional energy companies will likely shift more and more towards embracing renewables. Whether it’s investing in renewable technologies, producing renewable fuels or simply sourcing more power from renewables, current efforts across the energy value chain demonstrate that traditional oil and gas can coexist with low-carbon energy at the individual company level, even in midstream.