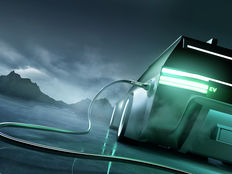 Investing in Electric Vehicles: What the FUTURE Could Bring

Not long ago, electric vehicles (EVs) seemed like a concept of the far future. But trends surrounding technology and sustainability have driven the EV industry to become one of the largest growth stories behind the automotive, logistics, and technology sectors. In 2021, global passenger EV sales were 6.6 million—more than double that of 2020 and more than triple that of 2019. Despite the significant increase in EVs, they remain only around 9% of total vehicle sales.(1) With the International Energy Agency (IEA) expecting global market share to reach as much as 61% by 2030 as net-zero emissions plans are executed, the EV industry could serve as a compelling long-term investment option.(2) Today’s note discusses the S-Network Electric & Future Vehicle Ecosystem Index (FUTURE) and how this index is positioned to capture growing investment in EV technology particularly as net-zero emissions targets are implemented around the world.

What will the FUTURE bring?

From a consumer perspective, passenger EV adoption was previously limited due to high price points and low access to charging stations. But within the past five years, electric vehicles have gained popularity and are no longer constrained to being luxury vehicles. Among the most significant milestones was the release of the Tesla Model 3 in 2017 which priced closer to traditional internal combustion engine (ICE) vehicles, while still carrying the luxury EV name brand. At a starting price of $35,000, this was half as expensive as the higher-end Tesla Model S, which started at just under $70,000. After the Model 3’s release, U.S. EV sales grew 85% in 2018 over 2017 levels (the Model 3 was 39% of 2018 sales) and has since then remained at high levels.(3) While Tesla still holds significant market share both within the U.S. and globally, traditional automotive manufacturers like Toyota Motor (7203 JP), Nissan Motor (7201 JP), Hyundai Motor (005380 KS), and General Motors (GM) are increasingly using their scale to grow market share and produce competitively priced options. Recent announcements include Toyota’s expectation to expand its electrified product portfolio to 70 models globally by 2025.(4) Nissan, which was an early EV market leader prior to Tesla, also recently announced a plan to launch 23 new electrified models by 2030.(5)

Lower price points have also been supported by cheaper lithium-ion battery packs, which have decreased in price by 89% from 2010-2020.(6) As EV batteries become more technologically advanced, vehicles can drive further without needing a charge. In 2021, the median range that an EV could drive on a single charge was 234 miles (almost 3.5x the median range ten years ago), while the maximum range was 405 miles (over 4x the maximum range ten years ago).(7) Additionally, public access to charging stations has increased significantly. Many consumers may live in an apartment or condominium without access to a personal electric outlet. Even those with their own garages and outlets could be hesitant to purchase an EV given its limited range (e.g., long distance drives would have to be planned around public charging stations). But between 2015 and 2020, the number of charging stations in the U.S. more than doubled. And during just 2021, the number of charging stations grew by over 55% to almost 60,000 charging stations (most with multiple outlets).(8)

On the commercial side, both retailers and logistics companies have shown an increased interest in electric vehicles, which can be more efficient, cleaner, and more cost-effective. While EV range and infrastructure may not be suitable (yet) for long-haul trucking (i.e., 18-wheelers), delivery companies are exploring EVs as an alternative for short-haul routes. Short-haul electric vehicles can include sedans, light-duty trucks, vans, and two- or three-wheel bikes. These fleets are typically used for e-commerce delivery or food delivery—both of which have grown more popular during the COVID-19 pandemic—and may allow for several short trips within a few hours before returning back to the charging base. Brightdrop (GM’s EV manufacturing unit), for example, announced several large orders for electric delivery vans in early 2022. Walmart (WMT) ordered 5,000 electric delivery vans, while FedEx (FDX) ordered an additional 2,000 on top of the 500 electric vans it received in December.(9)

What the FUTURE holds.

FUTURE was created to represent the electric and future vehicle universe. The index is comprised of three main business segments—electric and autonomous vehicle manufacturers, enabling technologies, and enabling materials. Through the manufacturing segment, the index provides exposure to both small EV-only manufacturers and also large automotive manufacturers which produce both ICE and electric vehicles. Enabling technologies include companies that own charging stations or manufacture batteries, semiconductors, or other autonomous technologies. Lastly, the index provides some exposure to materials companies which mine rare earth minerals for battery components.

Looking at performance history, FUTURE has performed similarly to its EV index peers, which is not surprising given similar selection criteria and weighting methodologies. Current sector weights for FUTURE, however, tilt slightly higher toward tech rather than consumer discretionary, which means the index may be a more diversified play away from the traditional auto industry. Large automotive holdings still carry a lot of the risks related to their ICE automotive products given that EVs are still a small portion of auto sales. Since many manufacturers are still in the early phases of investing in net-zero plans for 2030-2050 rollouts, the index could benefit over its peers as investments in the underlying EV technology and infrastructure grow. These subsectors may see earlier advantages compared to auto manufacturers, which may not realize the full benefits of EV adoption until more sales materialize. Additionally, there are many new entrants in the EV space which have not yet made deliveries or profits. These companies carry greater risk and are currently less represented within FUTURE since their market caps and trading volumes are often below the index’s requirements. For more details on the index methodology and construction, see the index website here.


Investing in E-Commerce: The Future of Search, Shop, & Ship


A Healthy Dose of Good News for SMID-Cap Biotech Indexes