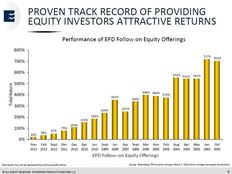 How do you condense a 32.3-megabyte, 206-slide analyst day presentation (available here) by industry bellwether Enterprise Products Partners (EPD) into a digestible post for readers of Alerian Insights? As you can see, it took me about 2.5 months to figure it out.

A question we often hear from individuals, financial advisors, and institutions alike is, “When’s a good time to buy MLPs?” We usually avoid giving a direct answer by noting that MLPs are a long-term investment in the build-out of energy infrastructure. But if there’s an individual MLP you like with solid management and fundamentals, follow-on offerings tend to be nice entry points because they are priced at a discount to the last close. Unlike the vast majority of the stock market, MLPs regularly seek financing for growth projects and acquisitions because they pay out a significant chunk of their cash flow each quarter to unitholders.

EPD has completed 19 such offerings since October 2002, and every investor in those offerings that continues to hold the units today is in the black. But another takeaway from this slide is that it’s been 18 months since the last follow-on offering—the longest such streak since the last commodity bust. And since EPD has a high coverage ratio and a $1.25 billion ATM, investors on the sidelines may not get that entry point that they’re waiting for.

EPD doesn’t have IDRs, which means that despite being the largest MLP, it takes less growth capex to move the distribution needle than would otherwise be the case because no incremental cash flow is being paid out to a sponsor. How much less?

Even if project returns average 10%, EPD only needs to spend $2.7 billion in growth capex to continue raising its distribution at the current pace while maintaining a leverage ratio under 4.0×. And that’s conservatively assuming the issuance of new common units and debt. Use retained DCF, and that shaves off $1.1 billion from the growth capex requirement. Increase project returns to the mid-teens, and another $500 million is no longer necessary. This scenario seems increasingly plausible with cost and availability of labor, equipment, and materials improving daily with the commodity downturn.

Another question we’ve gotten a lot in the last eight months is, “What’s your outlook for commodity prices?” Presumably EPD management has gotten this question a lot too, given the company’s ownership and operation of assets that are inherently short one commodity (input) and long others (output).

(Fractionators at EPD’s Main Plant Complex in Mont Belvieu, Texas. These were taken aboard a moving bus with my iPhone 5, which is why I filtered this to the hilt.)

Of course, just because an asset is inherently sensitive to commodity prices doesn’t mean that can’t be mitigated. EPD has fee-based contracts on assets like these, which means the earnings from their fractionation plants are only indirectly exposed to commodity prices. The company made its point this way:

In other words, either the company isn’t directly exposed to commodity prices or management knows how to deal with its exposure. Those that fail in this regard often end up in creative financing arrangements, something EPD investors aren’t particularly worried about.

As CFO Randy Fowler put it, “You don’t have to do an archaeological dig through our 10-K.” Management should consider renaming this slide, “The Anti-Enron”, since (embarrassingly) I had to look up what WYSIWYG stands for.

So what’s next for the company? EPD couldn’t build its way into the only US stacked play currently outside of its grasp, so we wouldn’t be surprised if it eventually buys its way into the Bakken, as Kinder Morgan (KMI) did earlier this year. Given higher breakeven costs in North Dakota due to insufficient pipeline takeaway capacity, a slower recovery in oil prices than what we’ve seen during the past couple of months might result in some distressed assets coming up for sale and help EPD’s cause on this front.