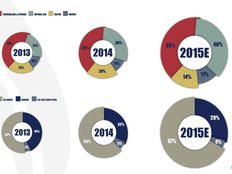 The Martin Midstream Partners (MMLP) Analyst Day (slides available here) was pretty packed with lots of new (to me) faces in the audience. This was their second annual analyst day (neither of which was held in Kilgore, Texas, home of the Rangerettes), and management took the opportunity to provide segment-by-segment guidance for the first time.

This decision is particularly important for a company like MMLP because of its involvement in less familiar businesses like lubricant packaging, prilling, sulfur, and fertilizer. If an investor doesn’t fully understand the business, they can’t model the performance drivers, and consequently won’t be able to buy the stock in good faith for their own account or on behalf of clients.


Also of note on this slide is the growing percentage of fee-based contracts. While, including cost-plus contracts, 71% is certainly higher than 57%, that still leaves 29% of 2015 estimated earnings directly exposed to commodity prices. The stock has certainly reflected that exposure, falling 29.9% in the last four months of 2014 against a drop of 13.7% for the Alerian MLP Index (AMZ) as oil prices crashed, and rising 41.8% in the first four months of 2015 against the AMZ’s 0.6% return as oil bounced back.


While volatile crude prices have had a marginal impact on some MLPs while upending others, none have filed for bankruptcy yet. The same can’t be said for their producer customers, and a question I’ve gotten a few more times during the commodity downturn is, “What happens if an MLP’s customers just stop paying their bills?” I posed this question to Wes Martin, MMLP’s VP of Corporate Development, and was pleased to find he was just as perplexed by it as I am. Why? Well, here’s a list of MMLP’s customers:

Large caps. Mega caps. Investment grade credit ratings. They pay their bills. Another 30% of their cash flow comes from Martin Resource Management Corporation (MRMC), which owns half of the GP interest and incentive distribution rights, so interests are aligned as far as turning MRMC receivables into cash is concerned. That said, it doesn’t hurt that producer balance sheets look a bit cleaner at today’s $60 oil price versus where the market was just a few short months ago.