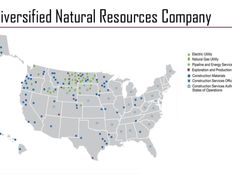 MDU Resources (MDU): Breaking Up Is Hard to Do

On the eve of its March 5th analyst day, MDU Resources (MDU) was trading 35% lower than a year ago. Investors who were hoping that the event would turn things around for the company have been disappointed, with the stock down another 9% over the last two months. While the company detailed how its five-year, $3.9-billion capital program would drive annualized earnings growth of 7%-10% through 2019, the market seems to have had a hard time placing that projection in context. So it may be time to explore a more drastic measure: breaking up the company into its disparate businesses.

Second, I am coming at this from a background in MLPs and energy infrastructure, where the idea of housing FERC-regulated pipelines in the same publicly traded entity as the first greenfield fuels refinery built in the US in 39 years would likely incite an investor revolt. MLP investors: imagine Western Refining Inc (WNR) merging its daughter MLPs Western Refining Logistics (WNRL) and Northern Tier Energy (NTI) together. This is exactly what MDU has done at WBI Energy, which, again, is just one of the company’s four business segments.

Third, MDU has taken the first step by putting Fidelity up for sale. That process has been delayed due to oil price volatility, but President & CEO Dave Goodin noted on the company’s earnings call last week that he is encouraged by some recent macro indicators.

Now that we’ve gotten that out of the way, what’s the case for breaking the company up? The easiest way to answer that question is to look at the company’s most recent earnings release and (attempt to) list all the performance drivers, which include weather, rate case settlements, pipeline transportation volumes, gas processing margins and volumes, aggregate margins and volumes, construction services backlog, pension liability, and oil and gas prices. And that’s just from the summary pages at the front. One can only pity the sell-side analyst trying to model all these different industries under one roof. A bank’s best bet is to have its E&C, utility, midstream, refining, and E&P analysts team up on this one. But at a market cap of $4 billion and average daily trading volume just north of $20 million, it may be hard to justify the resources required.

So what’s the easiest path to the breakup? Restructure the company as a stand-alone utility whose investors actually care about the 4% dividend CAGR historically.

Those same investors probably also care about the 11% rate base CAGR going forward.

This would involve selling Fidelity to the highest bidder once management decides that the macro indicators warrant doing so. It would involve selling MDU’s 50% stake in Dakota Prairie Refining to its JV partner Calumet Specialty Products Partners (CLMT), along with development rights to the second refinery currently under consideration.

WBI Energy’s remaining midstream businesses would then be sold to an MLP. Given the aggressive MLP practice of justifying acquisitions with future-year EBITDA multiples, we would not be surprised if these assets fetched $1.4 billion or more. And finally, Construction, which has recovered along with the domestic economy over the past few years, would be spun off as a separate company.

A more complicated, tax-efficient path would involve taking the midstream assets public as an MLP, then spinning off MDU’s GP/LP interest and IDRs as a separate company. The move wouldn’t be unprecedented. In February 2014, midstream operator ONEOK Inc (OKE) completed the spin-off its utility business as ONE Gas (OGS), and expected benefits to include “sharpened management focus on distinct strategic goals” and the “ability to more effectively benchmark its performance against its general partner peers.” In less than two months, natural gas utility NiSource (NI) will spin off its midstream businesses as Columbia Pipeline Group (CPG).

But in the words of ‘60s crooner Neil Sedaka, breaking up is hard to do. And if you’re looking for activist help, don’t hold your breath. The three largest holders as of December 31st were the “Big Three” ETF providers, which collectively (and passively) owned 20.14% of the shares outstanding. The only other beneficial owner, Parnassus, noted in its annual report that “we still like MDU’s remaining businesses, which are unique assets with good growth potential.”