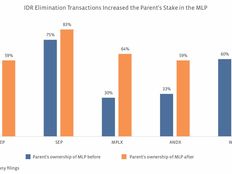 Last week we discussed reorganizations in the MLP space, and today, we look at the other prevalent simplification transaction in MLP land – incentive distribution right (IDR) eliminations. Several sponsors and MLPs have taken steps to eliminate IDRs and convert their general partner (GP) interest into a non-economic interest. Recall, IDRs entitle the GP to receive increasing percentages (typically up to 50%) of incremental cash distributions when the distribution to LP unitholders reaches certain levels. Over time, IDRs can become a burden to the MLP’s cost of capital. As we’ll discuss, lowering the cost of capital isn’t the only benefit of IDR eliminations.

IDR eliminations benefit the MLP by lowering the cost of capital.

In recent years, we’ve seen MLPs move to eliminate IDRs, as several management teams have acknowledged that IDR structures are not sustainable. IDRs are a great tool to incentivize the parent to grow the distribution following an IPO (and will likely continue to be included in MLP IPOs). However, IDRs become a burden as the MLP gets into the high splits. Prior to the elimination of its IDRs, Holly Energy Partners (HEP) was paying just over 30% of its total quarterly cash distribution to its GP HollyFrontier (HFC) as of 2Q17. Similarly, MPLX (MPLX) was paying roughly 30% of its total quarterly cash distribution to its GP Marathon Petroleum (MPC) as of 3Q17, even with a portion of distributions waived. The parent company, which received LP units in exchange for its GP interest and IDRs, will continue to receive significant cash flows from LP distributions, but the MLP will not have the burden of IDRs as distributions grow.

Eliminating IDRs permanently reduces the cost of equity capital for MLPs, as MLPs are free from the requirement of paying an increasing percentage of distributions to the GP. Without IDRs, the cost of equity capital is just the distributions paid on LP units, or effectively, an MLP’s yield. As such, it is less expensive to issue equity because there isn’t the increase in IDR payments that comes with an increase in units outstanding. For example, let’s assume an MLP has a yield of 7%. Without IDRs, its cost of equity is just 7%, but with IDRs, the cost of equity when factoring in the GP take (let’s assume 30%) is closer to 10%, which is calculated as 0.07 / (1.00-0.30). As the 30% continues to increase over time, so will the cost of equity, all else being equal. A lower cost of capital reduces the hurdle rate for project returns and broadens the opportunity set for MLP growth projects. In sum, eliminating IDRs improves the long-term sustainability of the partnership.

Parent companies also stand to benefit from IDR eliminations to the extent that transactions provide increased clarity around the value of ownership in the LP. Recall, parent companies typically own IDRs as well as a certain amount of LP units. The LP units have a clear value, as determined by the market. However, placing a value on the IDRs can tend to be somewhat opaque when held within a broader C-corporation like an independent refiner (e.g. HFC, MPC, ANDV) or exploration and production company [e.g. Hess Corporation (HES)]. In a simplification transaction, often the LP will issue common units to the GP in exchange for the elimination of IDRs and conversion of the GP interest into a non-economic interest. The result is that the parent will own a greater proportion of the LP’s interest following the elimination and will continue to receive significant LP distributions (though some GPs have waived a portion of their LP distributions to support the MLP). The chart below shows examples of how parent ownership of the MLP increased following IDR elimination transactions.

IDR eliminations also benefit the unitholder from a corporate governance perspective. The interests of the parent are better aligned with the individual unitholder when IDRs are out of the picture and the parent and unitholders are on the same plane in terms of distributions. That isn’t to say that the parent won’t ever put its interests above those of the MLP, but financial alignment helps. IDR eliminations may also make the MLP space more palatable to generalist investors who have been turned off by the GP/LP structure in the past due to corporate governance concerns or general confusion about the structure. A broader investor base would benefit existing unitholders to the extent that more money flows into the space, supporting equity prices.

Which MLPs have eliminated their IDRs?

As shown in the graphic below, there are several MLPs that have eliminated their IDRs or have announced specific transactions that will result in the cancellation of IDRs.

NuStar Energy’s (NS) IDRs will be cancelled as part of the merger with NuStar GP Holdings (NSH). USA Compression Partners’ (USAC) IDRs will be cancelled in a broader transaction with Energy Transfer Partners (ETP) and Energy Transfer Equity (ETE). For context, approximately 60% of the Alerian MLP Infrastructure Index (AMZI) constituents by weighting have eliminated IDRs (including NS).

IDRs are likely a dying breed.

IDR eliminations are likely to continue, particularly as MLPs mature and IDRs become a greater burden to the cost of capital.  Several sponsors and MLPs with IDRs have acknowledged the limited life span of IDRs. Anadarko (APC), which is the sponsor of Western Gas Partners (WES) and Western Gas Equity Partners (WGP), acknowledged on its 4Q17 call the natural lifecycle for the MLP structure and that there comes a time when the math of the MLP structure with IDRs requires some resolution. APC is actively evaluating various options. EQT Corporation (EQT), which is creating a new C-Corp for its midstream interests in EQT Midstream and EQT GP Holdings (EQGP) said on its recent call that it sees additional value by leaving IDRs in place for now and noted that the cost of capital is not a hindrance. EQT expects the new spin corporation to consider IDRs later. Phillips 66 Partners (PSXP) said on their recent call that their cost of equity is still competitive, but over time, there will come a time when IDRs will need to be addressed.

IDR eliminations have seemingly become a fact of life for maturing MLPs. While lowering the cost of capital is a primary motivation for pursuing an IDR simplification, there are additional benefits for the MLP’s stakeholders. More broadly, the elimination of IDRs may make the MLP space more palatable to generalist investors, as the sponsors’ interests become more aligned with those of the unitholders.