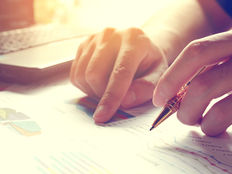 With no shortage of bad news in equity and commodity markets over recent weeks, today’s note highlights a steady tailwind for midstream – strong free cash flow (FCF) generation. VettaFi research frequently mentions midstream’s robust FCF, which is fueling buybacks and dividend increases, but it is helpful to quantify FCF at the company level. A brief overview of midstream capital spending trends helps explain why energy infrastructure companies are generating so much excess cash and why this tailwind has staying power.

Setting aside the perennial attraction of income, one of the key elements of the investment thesis for midstream in recent years has been significant free cash flow generation. The abundance of FCF has supported debt reduction, a proliferation of buyback programs (read more), and widespread dividend growth over the last year (read more). The table below shows estimated 2022 FCF (operating cash flow less capital spending) and FCF yields for some of the largest names by weighting across the Alerian index suite based on consensus estimates. The FCF yields shown average 11.3%, which is more than double the S&P 500’s FCF yield of 5.0% at the end of June.

Based on the consensus estimates shown in the table, all 14 names are expected to generate positive FCF, and all but TC Energy (TRP) are expected to generate excess cash flow even after dividends. Keep in mind that dividend yields for most of these companies are north of 5%. With only a few exceptions, companies are generally deploying more cash towards paying dividends than capital investments as the run-rate for capex has come down meaningfully. Note that the consensus estimates for capital spending do not include acquisitions announced this year.(1)


Why is midstream free cash flow so high and can it continue?


A brief history of midstream capital spending is helpful for understanding the magnitude and durability of midstream free cash flow generation. From 2010 to 2019, annual US oil production grew from 5.5 million barrels per day (MMBpd) to 12.3 MMBpd, and marketed natural gas production grew from 61.3 billion cubic feet per day (Bcf/d) to 99.9 Bcf/d. Energy infrastructure companies spent hundreds of billions of dollars to facilitate this tremendous growth by building pipelines, processing facilities, export terminals and other critical infrastructure backed by long-term, fee-based contracts (read more). As US production growth accelerated in 2018 and 2019, midstream capital spending was peaking.


Capital spending was already falling in 2020 with moderating production growth, but then budgets were further slashed in the wake of the pandemic as US energy production fell (read more). Spending plans have rebounded modestly with the stronger macro environment but remain well below 2019 levels for almost all midstream companies. Of the 14 names in the table above, all but TRP had lower capital spending in 2021 compared to 2019, and on average, the decline in capital spending from 2019 to 2021 was 62.9%. In dollars, the average decline was $1.7 billion, with a range of $800 million to $3.1 billion.


With capital spending reductions measured in billions, it is easier to understand why energy infrastructure FCF is so significant and durable. It is very unlikely that midstream capital spending broadly ever returns to the levels seen in 2018 and 2019 when US oil production growth was very steep (up 2.9 MMBpd or ~30% from December 2017 to December 2019). Based on forecasts from the Energy Information Administration, US oil production is not expected to return to its pre-pandemic highs until the fourth quarter of 2023. In other words, the need for newbuild infrastructure is not going to be as significant as it was. There are growth opportunities today (read more), but the frenzied infrastructure buildout of the 2010’s is not likely to repeat because production growth rates are likely to be more modest in the future and so much infrastructure has already been built, potentially allowing for cost-efficient expansions.


With capital spending expected to remain measured, it is important to discuss the other component of FCF – operating cash flow. The infrastructure buildout of the 2010’s resulted in growing cash flows for midstream companies. Those long-lived assets will likely to continue generating fees that drive stable cash flows for years to come, whether oil prices are at $120 or $80 or $60 per barrel. There is also the potential for growth from new projects, expansions to existing assets, or acquisitions.


1Q22 Midstream Dividends and the Outlook for Variable Payouts


Midstream and Natural Gas: More Growth in the Pipeline