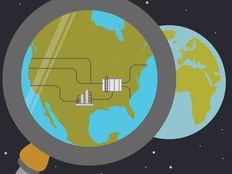 While many have probably noticed higher gasoline prices lately (read more), the doubling of Henry Hub natural gas prices since April may have been less apparent. What has driven the rally in natural gas, and what do improving fundamentals mean for midstream? Today’s note looks at these items and the constructive long-term outlook for natural gas.

Natural gas prices rally to multi-year highs.
Natural gas prices have steadily increased since April driven by strong domestic consumption through one of the hottest summers on record and growing liquefied natural gas (LNG) exports as demand improves overseas. Meanwhile, on the supply side, US production has been largely stable as exploration and production companies remain committed to capital discipline. Inventory injections through the summer have fallen short of five-year averages, setting the stage for below-average inventories entering heating season on November 1 when prices tend to be stronger seasonally (read more). Prolonged Gulf of Mexico production outages from Hurricane Ida in late August have further exacerbated the supply situation — driving natural gas prices to a seven-year high of $4.91 per million British Thermal Unit (MMBtu) on September 8.

Stronger prices are supporting upward revisions to US natural gas production estimates.
With prices improving, expectations for natural gas production are also moving higher. In its September Short-Term Energy Outlook, the US Energy Information Administration (EIA) estimated marketed natural gas production of 102.7 billion cubic feet per day (Bcf/d) in 2022. Relative to the EIA’s projections in May 2021, estimates for 2022 have increased by more than 2.5 Bcf/d (+2.6%). As shown below, the EIA is forecasting annual production growth of almost 4% for 2022. Notably, the EIA expects production to surpass the pre-pandemic high from December 2019 of 104.2 Bcf/d in August 2022 and forecasts that production will exit 2022 at 106.1 Bcf/d.

Higher natural gas production and exports fare well for midstream.
As volume-driven businesses, the expected recovery in natural gas production bodes well for midstream. Midstream companies are key players in the natural gas value chain through their involvement in gathering and processing, as well as transporting natural gas and natural gas liquids (NGLs). For context, raw natural gas must be gathered by pipeline and moved to a processing facility, where impurities are removed and NGLs separated. NGLs are further processed at fractionation facilities. While these activities indirectly support exports, some midstream companies are directly involved in LNG and NGL exports. For example, Enterprise Products Partners (EPD) owns marine terminals on the Houston Ship Channel that export propane, butane, and ethane. Cheniere Energy (LNG) is the second-largest LNG operator globally and the largest LNG producer in the US. Kinder Morgan (KMI) also has interests in LNG terminals. US LNG exports reached new highs in 1H21 and more than doubled in June on a year-over-year basis, while pipeline exports to Mexico rose steadily through 2021 to establish a monthly record in June.

While some investors may think of midstream companies as primarily operating oil pipelines, many names generate the majority of their cash flows from assets focused on natural gas. In Alerian’s broadest midstream index, the Alerian Midstream Energy Index (AMNA), over 70% of the index by weighting is focused on natural gas as shown below. Some of the large C-Corps in the space are classified as Pipeline Transportation│Natural Gas. As such, the exposure to natural gas in the Alerian MLP Infrastructure Index is more modest at ~50% as shown. Notably, with fundamentals improving, many midstream corporations and MLPs with assets servicing natural gas and NGLs increased their 2021 EBITDA guidance or pointed to the high-end of their full-year guidance range on 2Q21 earnings calls (read more).

Constructive long-term outlook for natural gas bodes well for midstream.
Given that many midstream companies primarily generate fees by transporting and processing natural gas, it bears noting that the long-term outlook for natural gas is supportive. As shown in the charts below from the EIA’s 2021 Annual Energy Outlook, US production and consumption of natural gas is expected to increase through the forecast period to 2050. Taking a more global view, the International Energy Agency’s latest Gas Market Report estimates that global gas demand in 2024 will be 7% higher than pre-pandemic levels, with Asia Pacific driving nearly half of the expected growth. Broadly, natural gas has a role to play as a substitute for coal, and as renewable power gains more traction, natural gas is expected to be a source of energy security when unexpected weather conditions interrupt supplies of renewable power. For example, Brazil, which relies on hydropower to generate about 65% of the country’s electricity, imported record volumes of US LNG in June upon experiencing its worst drought in over 90 years.

Bottom Line:
While the near-term improvement in natural gas fundamentals is positive, the constructive long-term outlook for production and demand in the US and expectations for global demand growth also bode well for midstream in the coming years.