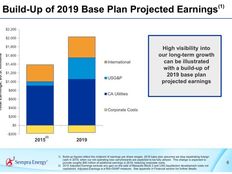 When Is a Utility Not a Utility? A Review of the Recent Sempra Analyst Day

We weren’t able to attend the Sempra Energy (SRE) Analyst Day (slides available here), and so instead we were left eagerly anticipating the announcement of an MLP or YieldCo from our Dallas offices. While no S-1 was filed, SRE did announce that from 2015 to 2019, it is expecting an EPS CAGR of 11%. I’m not a Utility analyst, but even I know that an 11% CAGR is really high for a business that supposedly depends on rate cases. SRE is able to project double-digit annualized growth because of its US Gas & Power (USG&P) segment, which houses the company’s midstream energy infrastructure assets. That’s a business with which I am familiar.

The major source of projected earnings growth in USG&P will be from Cameron LNG Trains 1-3, which will come online by the end of 2018 and contribute $300-$350 million in 2019. While they won’t contribute to earnings growth, the cash flow from the original west-to-east REX contracts will not have finished rolling off until their expiration dates in 2019, thereby guaranteeing a baseline of cash flows for the pipeline. East-to-west contracts are still being inked.

It wasn’t until last year’s analyst day that management spoke about exploring the use of an MLP. This year, management was clear which assets (Cameron LNG, midstream, and renewables) they expect to place into the Total Return Vehicle (TRV). Notably, they are discussing a TRV and not necessarily an MLP, because they want the option to include their renewable power generation assets. If SRE does use the MLP structure for the TRV, the renewables will be housed in a corporate subsidiary that pays dividends to the publicly traded TRV. (For years, MLPs have done this with assets that generate non-qualifying income, such as gas stations and convenience stores.)

While there are many diversified MLPs, having renewable alongside midstream assets will be a first for the structure. The management team at SRE believes that investors assign premium valuations to quality, which they define as having the following characteristics (as listed on slide 18):

This is the same argument that marine transportation MLPs and YieldCos have been making to investors for years.

It’s also not SRE’s first time having a publicly traded subsidiary. IENova went public in 2013 as the first and only energy company trading on the Mexican Stock Exchange, a distinction it still holds. Given that the entirety of Mexico’s energy industry was state-owned until President Enrique Peña Nieto’s energy reforms in 2013 and 2014, IENova has an impressive suite of assets and is currently bidding on an additional $11 billion worth of projects.

As Mexico continues to privatize its energy industry, other energy infrastructure companies have announced plans to extend their reach south of the border. NuStar Energy (NS) is building liquefied petroleum gases and refined fuels pipelines in partnership with Petróleos Mexicanos (known colloquially as Pemex). TransCanada (TSX: TRP) already has a few natural gas pipelines in Mexico and more are under construction. Energy Transfer Partners (ETP) announced the construction of new natural gas pipelines in Mexico in 2014. Kinder Morgan’s (KMI) natural gas pipeline system goes right to the border at many points, and even extends into Mexico on a limited basis. As these companies begin to expand their footprints, they’ll run into SRE (via IENova), which is already exceptionally well positioned.

So, when is a Utility not another boring, old Utility? When it has the assets, growth plan, monopolistic footprint, and mindset of an energy infrastructure company.