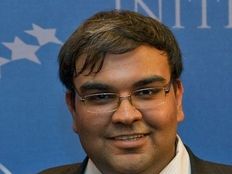 The future of Artificial Intelligence is here. It’s already affecting finance and investing, and now it’s entering the ETF space. In this interview, Shaunak Khire walks us through the implications of AI in the finance industry. Khire is a member of the Tech Committee at the Clinton Global Initiative and is also a member of the Ex Global Board of Mobile Marketing Association. Furthermore, Khire is the co-founder of Stealth and a Partner at Magha Holdings, a fintech company at the crossroads between technology and finance.

Magha Holdings created the Magha CGI 30 Index, which is an index designed with the help of AI and consisting of large-cap U.S. equities. The index has outperformed the S&P 500 over the last two years.

Below, ETF Database takes a closer look at this index, the ETF that may be launched soon, and how AI is changing the game in the world of finance.

ETFdb.com (ETFdb): What selection process does the Magha CGI 30 Index use and how did it begin?

Shaunak Khire (S.K.): The index constituents’ selection process is based on qualitative measures. This means that we don’t just look at the financial statements of companies. Instead, we score companies based on natural language processing (NLP). One thing we look at is annual reports and what the company has done with corporate foundations. That gives us a sense of where the company is headed and how it’s contributing to overall impact, whether that’s in man hours, cash donations, etc. To measure those things in a qualitative way we need to process that data through an NLP engine that can detect keywords, sentiment, and analyze reports.

That’s essentially how we began. We had to custom-build the entire engine in-house. This same engine is powering an Artificial Intelligence, Emma, and what she can do right now.

ETFdb: The Magha CGI 30 index consists of large-cap U.S. equities with an average market cap of about $150 billion. Furthermore, the index is said to comprise socially responsible holdings. What determines if a company is socially responsible or not based on your methodology? In other words, what is the criteria for a company to be included in the index?

S.K.: Good question. All corporations give back in some way or another. What we measure is:

An example I love to give is that of P&G. Their commitments in India (the Shiksa program, which is building schools there) and in Africa (literally dropping clean water packets) tick off all the three boxes. Compare that to say Exxon. We don’t exclude Exxon just because Greenpeace thinks it’s bad, but we will rank it lower than P&G because big oil’s giving isn’t exactly transparent in some countries.

Now, that’s the giving/commitment part. Then there are other criteria such as having an LGBT-friendly culture, the number of women in executive management/on the board, CDP scores and the overall impact ($) generated by the giving program. Each company is then rated on a 1-4 scale (1 being the lowest and 4 being the highest) and weighted by this rating and then selected for inclusion in the index based on standard ratios and performance.

At the end of the day, if you take each data point to its conclusion the premise is simple: the best companies are able to attract the best talent, remain sustainable and have positive engagement with all stakeholders. In doing so, they are also fiscally prudent, have the requisite bench when a change in a leadership is to be affected and a highly respectable brand in their sector.

ETFdb: What’s the relationship between the Magha CGI 30 Index, the ETF that Magha is planning to launch, and the Clinton Global Initiative?

S.K.: The Magha CGI 30 Index is weighted by CSR initiatives that constituents of the index have publicly announced at CGI. Combined, these initiatives have impacted more than 10 million lives with an estimated economic value of $30 billion + (that is our analysis).

The CGI continues to be a massively important forum that has the ability to quantify social impact in a very public way by holding corporations responsible for sustainable development of all stakeholders through a commitment model that delivers tangible results. The ETF, of course, is based on the index.

S.K.: As of right now, the beta is just above 1, at 1.03. But broadly, the yearly average has been well below 1. One reason the index outperforms the broader market is because it has the perfect balance between traditional value plays, like a Berkshire or Microsoft, and growth plays, such as Google and Facebook, which have outperformed the market for the last two to three years. Index constituents are also replaced based on financial performance during the course of the year versus their replacement (which must be in the same social impact bracket).

You don’t see much volatility because the index, by design, gives a lot of weight to very large-cap, value stocks like GE, P&G, and Berkshire, among others.

In addition, the fundamentals of nearly all of the index constituents are strong, even in the case of a company like Exxon. So to answer your question, the index is a great mix comprising roughly, three-quarters global value plays and one-third growth plays.

That mix stems from the fact that the criteria for inclusion in the index is based on the depth of a company’s CSR initiatives, which we see in most cases is a leading indicator for growth, since you – either as a company or an individual – can only realistically make a broad social commitment if your fundamentals are strong.

ETFdb: What is the relationship between Motif Investing and the CGI 30 Index?

S.K.: The index is available for investing and trading on the Motif platform for retail and institutional investors. Any fees, i.e trading commissions generated, are donated back to end child hunger in the U.S. and India through nonprofits that have an association with CGI, which is basically most major nonprofits (e.g. FeedingAmerica, AkshayaPatra).

ETFdb: I’m not sure if you’re allowed to disclose this, but when is the ETF that tracks the CGI 30 Index planned for launch?

ETFdb: As a side question, since one of your specialties is Artificial Intelligence, how will AI change the landscape of finance and investment products such as ETFs in the future? Would you say that algorithms and rules-based methodologies will completely erase the need for active investing by portfolio managers?

S.K.: I think AI will ultimately make financial products more accessible. You are already seeing that shift occurring by way of robo-advisors like Wealthfront, which promise lower fees than your typical wealth manager. I think that will extrapolate to hedge funds and asset managers, where you won’t need someone to create a predefined strategy for your hedge fund and by extension, over time there probably shouldn’t be a reason why an LP couldn’t allocate the capital by itself. You can also extrapolate that to insurance products, particularly on the exotic side, for example with CDS, or the more mundane like weather insurance.

The great thing about the technology behind AI, neural networks, and supervised or reinforcement learning approaches is that you now have an entity whose goal is sort of predefined. This goal is to allocate capital as efficiently as possible while maximizing returns. It can do this way more quickly than is remotely feasible for a team of humans. Therefore, I believe over the next three to five years, most asset managers will start having people to oversee an AI’s investment strategy and making sure there are no “fat finger” trades for an algorithm as opposed to actively investing in the markets.

Having said that, I think funds that have a large time horizon, like five to ten years, would still need active investing by the portfolio manager. There are human elements that are involved: for example, management succession, expansion into newer markets, etc. I guess if you are a fundamental investor, like a mutual fund, you are going to use AI to augment your investing decision, such as estimating what the earnings might be in ten years in, say, China or India if the macroeconomic policy in that country was hawkish. Whereas if you are a hedge fund, you are going to use AI for pretty much everything based on your strategy.

I don’t think ETFs as a product will change in the near future, however, they will evolve in ways where you will essentially be able to create and invest in your own basket. Today, it is impossible to have a single portfolio manager working for you, so a normal person will end up investing their 401(k)s into a tracker or a Vanguard ETF. With an AI or a robo-adviser, you now have the ability to invest in a product that is tailored specifically for your needs and your goals and not just marketed in that way. For example, if you are looking to buy a home ten years out, the AI will definitively recommend a strategy that ties in your job, your social life, and so forth. It doesn’t force you to change your lifestyle, instead it will recommend another strategy. I believe personalization is the single largest thing to look forward to when it comes to individual investing.

One macro thing to remember is that we have been taught to think of companies as a collection of shareholders having share certificates (digital or physical). In and of itself that idea is probably 200-300 years old and is ripe for disruption. If you take a closer look at what Blythe Masters is doing at Digital Asset, it is basically about transacting on the blockchain, which as of today is limited to complex back office operations for settling securities more quickly, but it can evolve to an entirely new format of issuing bitcoin-based securities. That then gets very interesting but that’s still far way out.

The Magha CGI 30 Index has been designed with the help of AI to track socially responsible large-cap equities. It’s outperformed the market since it was designed with very specific qualitative measures that an AI can analyze. An ETF that tracks this index hasn’t been launched yet, but if Khire’s comments are any indicator, the fund will be launched this year. Going beyond this index, Khire expects that Artificial Intelligence will make investing products more accessible and unique to each individual’s goals in the near future.