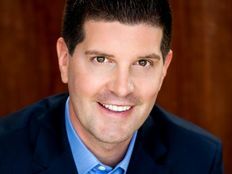 CEO of Amplify Shares His Views on ETF Market Opportunity

Earlier this year, during the 2017 Inside ETFs Conference, ETF Database sat down with the CEO of Amplify ETFs, Christian Magoon. We talked about his involvement with ETFs since 2005 at one of the top ten issuers. He explained his approach when releasing new ETFs and how he managed to launch over 60 ETFs throughout his career. Mr. Magoon also shared his views on the mutual fund vs. ETF debate, smart beta ETFs, trends in the industry, and the future of ETF fees.

ETFdb.com: Please tell me a little bit about yourself, and your role at Amplify ETFs.

Christian Magoon (C.M.): I am the CEO and Founder of Amplify ETFs. I’ve been involved in the ETF industry since 2005, most notably as president of what is now Guggenheim Investments, one of top-ten ETF issuers. I started the Claymore ETF business in 2005 and it eventually sold to Guggenheim in 2009. That legacy product line has a fair amount of successful products that were often first-to-market products including the first BRIC, multi asset and maturity date corporate bond ETFs. My goal at Amplify is to build another ETF brand, not unlike we did at Claymore. We’re hard at work doing that, and April 2017 was our first full year in the ETF business at Amplify.

ETFdb.com: Given that Amplify ETFs sponsored the YieldShares High Income ETF (YYY B+) and only recently launched its first three ETFs, as you mentioned, you’ve only been in the business for about a year. How are you finding the competition from huge issuers, such as Blackrock and Vanguard, and how are you differentiating yourself?

C.M.: When we launched our first Claymore ETFs in 2006, we were introducing the new brand by speaking to ETF analysts and related media outlets. They said, “You think you can make it? There’s already 13 ETF sponsors here in the U.S. Don’t you think you’re late to the game?”. I said that I really thought there was a lot of opportunity just by looking at the mutual fund space and how many issuers and funds there were. Now fast forward more than 10 years to today and we’re close to 80 ETF issuers, yet a big gap remains versus mutual fund. I think there is still opportunity for new issuers, but you must differentiate your products and you have to bring investment strategies or market segments that aren’t already there.

You can take a commoditized approach if you’re willing to do big scale and you have massive other businesses that can subsidize that approach. When I look at those types of profiles, I think of Schwab, Fidelity, etc. – they’re able to compete in the large ETF space that includes domestic equities and some of the other aggregate bond funds. What we’re trying to do is different. We’re trying to bring unique market segments and investment strategies in the form of the ETF. Our new name is Amplify, and the reason we chose Amplify is because we think the ETF structure helps to amplify an investor’s experience within a strategy, or within a new market segment, because of the tax efficiency and the transparency. There are a lot of market strategies that still reside in research, managed accounts format or mutual fund format that aren’t in the ETF space yet. We’re trying to bring those into the ETF space in order to amplify them.

From Active to Passive

ETFdb.com: Speaking of mutual funds, you didn’t really mention much about active, but I want to bring this into the picture as well. There was almost a one-trillion-dollar shift from active investment management to passive in 2016, according to data from the Investment Company Institute. Why do you think this is so, and do you see this trend continuing?

C.M.: We launched our first active ETF at the end of 2016, so this is timely. It’s something we’ve been thinking about. Active management, especially in the form of mutual funds, has not been able to outperform or earn its keep versus indexes. I think it’s all about performance. There’s a little bit of confusion on whether it’s active management that’s responsible for the underperformance or if it’s perhaps some of the fees and expenses associated with mutual funds. There are some dynamics there in terms of how inflows and outflows work and how retail investors actually control the manager by pulling capital out and putting it in, often at the wrong times.

But to your point, we do see indexing’s great run here in terms of performance. We still think though that there are areas where active managers add significant value. Some of those areas, for example, are in more sophisticated markets, under the fixed income markets, or strategies that maybe need a fair amount of adaptation to market conditions or price movements. We launched our first active ETF, Amplify YieldShares CWP Dividend & Option Income ETF (DIVO A-). It’s the first covered call active ETF to not only actively select stocks, but actively and opportunistically write calls on securities – the actual individual stocks, not the indexes.

It’s hard to program rules for every market condition in an index. Instead, we partnered with a manager with a four-year track record and we’re using that strategy as the basis for the DIVO ETF. I’m excited to say that it was just nominated as a finalist to be Active ETF of the Year by ETF.com.

ETFdb.com: Speaking of trends, what do you see are the top three trends in the ETF industry going forward?

C.M.: Price compression is going to be big. I think it’s now leaping from just your traditional market cap-weighted index ETF – the S&P 500, or even traditional products like style box ETFs – to the smart beta area. Smart beta is starting to become very price competitive, partly because we’ve seen so much asset growth in the space. The old headline was “ETFs are reducing their expenses,” but really it was primarily in core style box and market cap-weighted ETFs. It’s going to move now into smart beta areas. That’s going to be valuable because more flows are going there which will save investor’s considerable money. So that’s number one: ETF cost savings leaping from core to smart beta.

Number two is the emergence of new issuers. Issuers you wouldn’t necessarily think of like mutual fund companies or those that operate in the managed account world will enter the ETF space. It’s no longer an option to not have a plan for ETFs if you’re an asset manager in the mutual fund space. That’s forcing many companies to bring out products or to partner with other sponsors. In turn, you’re going to see more blue-chip names enter the space.

A third trend I’d expect is that more sophisticated strategies will arrive in ETFs. Whether that’s dynamic strategies, like currency hedging, or other types of asset allocation within an ETF. I think ESG strategies are going to become more popular. Many people want their money to match their morals, and there’s not a great selection right now in the ETF space.

ETFdb.com: I also wanted to talk to you about the recent ETF fee cuts by issuers such as Blackrock, Charles Schwab and Vanguard. Where do you see this fee war heading? Do you see these fees being lowered only for the major high AUM ETFs, or for smaller guys as well?

C.M.: I’ve been on the record saying fees are eventually going to zero on many broad based market ETFs. Why? Because there are other ways for some of these large issuers to make money. If you’re at Schwab or Fidelity, you make money if somebody is buying your Fidelity or Schwab ETF, or if they’re your client in another area. If you’re maybe at iShares or State Street, you may be able to make money through securities lending. So there are other sources of revenue. These large broad based ETFs that are ten, eight or six basis points now could easily go to zero, in my opinion. Think of these broad based ETFs being the Thanksgiving turkey that gets people into the store, and then they buy other things, and that’s where the profits are. I think that’s what’s happening, or is going to happen.

ETFdb.com: Speaking about ETFs and mutual funds, do you think they can play nicely together in the long run, or do you think portfolio management is headed more toward ETF portfolios as opposed to mutual funds?

C.M.: I do think the asset management industry is clearly headed more toward the ETF space, because ETFs tend to be more like portfolio building blocks than mutual funds. The dominant indexing component in ETFs right now is what is driving that.

The big trump card for mutual funds right now is their prevalence in retirement plans. Until ETFs crack that in a big way, I think mutual funds are going to be the majority of retirement assets. One interesting related opportunity for ETFs is that a tremendous amount of baby boomers are starting to retire, and they’re doing rollovers of employer plans into personal IRAs. When that rollover happens, ETFs are now more likely to capture new assets since ETFs have greater market share outside of traditional retirement accounts.

The second trump card is millennials, because they are more likely to adapt to new technology in all areas, including financial products. iShares recently announced a study that showed millennials, as an age group, are the highest percentage users of ETFs. They tend to recognize trends early on, and things they were using a few years ago, like maybe Twitter and Snapchat, are now mainstream technologies. I think that bodes well for ETFs in the next five to ten years.

I think we are in the midst of a massive sea change. I’m not someone who thinks everything should be ETF, but I’m not somebody who thinks everything should be in the mutual funds space either. In fact, I think both vehicles can complement each other. But as you know, usually the most efficient vehicle or technology wins out over time. ETFs at this point, given current structural advantages versus the traditional mutual fund in terms of fund operations and investor access, seem to be the growth leader.

ETFdb.com: One last quick question. What are some key insights from the ETF conference so far that you’ve found?

C.M.: At the ETF conference, we announced a new ETF incubator technology. We’ve been pleasantly surprised at the demand from existing asset managers, mutual fund families, SMAs and ETF issuers for this technology. I think it just validates that all types of investment firms want to get into the ETF space, but in a way where they have lower risk in terms of economics. It validates the increasingly important role ETFs have in the asset management business.

Stay up to date with our latest Q&A Interviews here.

The ETF industry still has a lot of opportunity for growth. Mr. Magoon sees the trend toward passive ETFs and away from active mutual funds continuing. ETF fees are decreasing and going to zero for some ETFs, according to Christian Magoon. Meanwhile, the trend toward smart beta ETFs and more sophisticated strategies will continue to grow.

Sign up for ETFdb.com Pro and get access to real-time ratings on over 2,000 U.S.-listed ETFs, including Amplify ETFs.