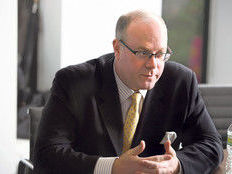 IndexIQ has made a name for itself in the ETF industry, creating some of the most innovative ETF products to hit the market in recent years.

We recently had the opportunity to talk with Adam Patti, CEO of IndexIQ, about his firm’s unique merger arbitrage and hedge fund strategies, as well as his thoughts on the commodities industry.

Adam Patti (AP): 2014 was a very big year for mergers and acquisitions activity, and so far it looks like 2015 might be even bigger. Deal activity has been strong up and down the market cap spectrum, and headlines have been driven by M&A involving boldfaced names, like the desire by Heinz to pursue an acquisition of Kraft Foods in what would be a $40 billion deal, Royal Dutch Shell’s $70 billion offer for BG Group, and the just-announced acquisition of Time Warner Cable by Charter Communications for $55 billion. When there are this many deals being announced there are opportunities for investors to participate in merger arbitrage opportunities.

This climate has been a driving force behind significant investor interest in our IQ Merger Arbitrage ETF (MNA), which has seen its assets quadruple over the last year.

ETFdb: How can investors capture merger arbitrage in an ETF structure?

AP: We have found through our research of global merger arbitrage strategies that there were a handful of attributes that can help separate those deals with a greater chance of coming to fruition from those that are likely to fall apart. A few of the key points we uncovered:

We also do not add any deals that are only “rumors.” To the contrary, there must be an official announcement, after which we can look to add exposure to the deal during our next monthly re-balancing.

ETFdb: Which strategies do you see as being of particular utility to investors given that we likely are headed for a Fed rate increase later this year?

AP: We would certainly point to merger arbitrage as a strategy that could help investors avoid the sting of another “taper tantrum” should markets react unfavorably to a Fed rate increase. I would also point to liquid alternatives generally, and certain hedge fund replication strategies in particular as helping cushion what could be a period of rising volatility and falling rates. An example of this would be our IQ Hedge Multi-Strategy Tracker ETF (QAI) which has proven itself as an excellent fixed income alternative in its 6+ year live history. QAI, with over $1bn in AUM, is now known as the “S&P 500” of the hedge fund market and is designed to provide price appreciation in rising rate environments with a low volatility profile.

ETFdb: Hedge funds have largely been under-performing the broad equity markets in recent years. What would you say to investors who would point to that performance as a reason to avoid hedge fund replication and liquid alternative vehicles?

AP: I would point to several important factors for investors to consider:

First, not all hedge funds are looking to beat the broad equity markets. In fact, many are, I would think, delivering exactly the kinds of return patterns they’ve promised investors and acting as a hedge against downside risk while dampening overall volatility. If you look historically, hedge funds have provided 3%-6% over the risk-free rate. When the risk-free rate is zero, as it has been in recent history, investors should expect a total return of 3%-6%. However as rates rise, the return profile of hedge funds will rise commensurately. This is why a multi-strategy hedge strategy ETF like QAI is an excellent fixed income alternative in a rising rate environment. Investors should experience price appreciation with low volatility in an environment where bond prices decline. In fact, over the last 11 periods where the 10-year treasury bond yield increased by 40bps or more, QAI has outperformed bonds in each period.

Second, there were 610 hedge funds in 1990, according to HFR. There were 10,149 as of the end of Q1 2015. With a finite number of alpha opportunities globally, these hedge fund managers (and the ~10,000 actively managed mutual fund managers) are in effect competing away the alpha. What investors are left with is a high fee, tax-inefficient investment strategy that is largely providing them a unique beta exposure. This hedge fund beta or “alternative beta” exposure is quite valuable for portfolio diversification, however, we at IndexIQ have proven that you don’t need to pay alpha fees for beta performance. Given that it is incredibly difficult for investors to identify and access hedge fund managers that provide consistent alpha, we have always been a proponent of a core-satellite approach to portfolio construction in the alternatives space, with a liquid alternative vehicle at the core. Then, if you have the skill and resources to identify and access alpha generating managers, do so as satellites to that inexpensive Alternative Beta core.

While alpha is scarce, Alternative Beta can be commoditized and delivered in a liquid, transparent, low-cost vehicle. Our suite of hedge fund replication ETFs, which we recently expanded in March with the launch of our IQ Hedge Long/Short Tracker ETF (QLS) and IQ Hedge Event-Driven ETF (QED), is proof of that. When we first launched QAI back in March 2009, there was significant skepticism that we could provide this hedge fund exposure so efficiently; however, now given the track-records of our various hedge fund replication strategies, which in addition to those above include our IQ Hedge Market Neutral Tracker ETF (QMN) and the IQ Hedge Macro Tracker ETF (MCRO), few would dispute our success in democratizing alternative investing.

ETFdb: Beyond merger arbitrage and hedge fund replication, you’ve also talked about why now may be a good time for investors to consider adding commodity exposure. Can you explain why?

AP: Commodities have been hit hard in recent years, but there are some green shoots. For investors who are interested in adding to their commodity exposures in advance of a potential rebound, the IQ Global Resources ETF (GRES) could be worth a look. GRES offers the broadest exposure of any commodity equity ETF on the market. Its underlying index includes companies from all of the major commodity sectors (precious metals, industrial metals, livestock, energy, and grains, food & fiber) as well as timber, water and coal. The index also includes short exposure to global equities as a partial market hedge to reduce volatility and reduce correlation to the equity markets. GRES has been among the top performing broad commodity/natural resources ETF in the market, with low volatility, since its inception in October 2009.

Another fund I would mention is the IQ Canada Small Cap ETF (CNDA). Canada is a commodity-driven economy and commodities are the best asset class against which to compare Canada’s overall performance. On an absolute basis, Canada’s performance has been down due to falling energy and materials prices and the relative value of the Canadian dollar versus the U.S. dollar. On a relative basis, however, Canada has performed reasonably well compared to other commodity funds.

Right now, with the U.S. dollar so strong, Canadian assets are generally cheap. That, coupled with a possible rebound in commodities overall, could make now an interesting time to consider adding Canada exposure.

For those investors looking to implement a unique strategy, IndexIQ’s lineup of merger arbitrage and hedge-fund ETFs are a compelling option, providing easy access to alternative beta methodologies.