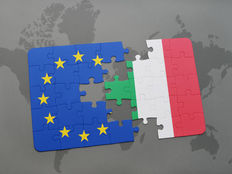 Why Italy Might Be Next to Leave the EU

The United Kingdom’s historic referendum to leave the European Union (EU) may have set a dangerous precedent for the rest of the politico-economic bloc. In Italy, the so-called Five Star Movement (M5S) is rapidly gaining traction with a promise to put a Brexit-like EU referendum on the table. Many experts believe that such a move could, ultimately, destabilize the Eurozone and, perhaps, jeopardize the entire region’s economy.

In this article, we will take a closer look at Italy’s economy, its volatile political scene, and what an Italian departure might mean for the rest of the Eurozone.

Italy’s economy is among the weakest in the Eurozone, according to the International Monetary Fund (“IMF”), driven by an 11% unemployment rate, high levels of bad debt and apathetic politicians. The IMF recently lowered its projected growth rate to less than 1% this year and just 1% next year, saying that it will not return to pre-2008 crisis levels until the mid-2020s. By comparison, the wider EU is expected to grow 25% over the same timeframe.

According to data from the Bank of Italy, gross bad loans at Italian banks stood at nearly $220 billion in June. These bad loans make up nearly a fifth of the country’s banking assets after doubling over the past six years. While European regulators may step in with a bailout – as the U.S. did back in 2009 – the timing of such a move remains unclear, and the EU has been notorious for being reactive rather than proactive in dealing with these issues.

Italy’s struggling economy has taken a toll on its citizens, which could bolster the odds of leaving the European Union. With unemployment at 11% and corruption widespread, it shouldn’t come as a surprise that citizens are looking to shake up the status quo. It doesn’t help that the impact of the Brexit has been less-than-catastrophic so far, suggesting there’s less danger in a “leave” vote than many experts are warning.

On December 4, Italy held a referendum to approve or reject constitutional reforms demanded by former Prime Minister Matteo Renzi. These reforms were aimed at streamlining the country’s political system, but an anti-government vote has led to the resignation of the Prime Minister. Five Star Movement candidates – who are quickly rising in popularity – could replace Matteo, which could in turn lead to a vote to eventually leave the EU.

Consequences for the EU

Italy may be fraught with economic problems, but it’s still the third largest economy in the European Union, which means that a departure could be catastrophic. In addition to the sheer economic impact of such a move, the departure could encourage other Eurosceptic countries to make similar moves, such as Greece. The impact of disintegration could be significantly greater than the 2008 financial crisis spurred by the U.S.

On the other hand, an exit from the European Union could prove beneficial for Italy’s domestic economy. The country has been unable to devalue its currency – since it uses the shared Euro currency – in order to combat its domestic economic problems. The greater flexibility that comes with a domestic currency could be used to stem its economic troubles and potentially improve the long-term health of its economy.

In the end, the negative consequences of leaving the EU would likely significantly outweigh these benefits, at least in the near-term.

The UK’s historic vote to leave the European Union may have set a dangerous precedent for the rest of the politico-economic bloc. With its poorly performing economy, Italy’s political scene is vulnerable to a referendum on whether or not to remain in the EU – the so-called “Quitaly” scenario. A “leave” decision could have disastrous consequences for the EU, given Italy’s status as its third largest member.

Some High-Conviction Stocks Found in QQQ and QQQM