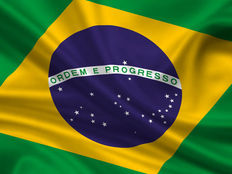 Brazil has long been one of the most alluring emerging market economies, earning itself the “B” in the popular BRIC nation group. Its economy was once bustling and offering handsome growth for investors, but that has screeched to a halt in recent years. What’s worse is that it does not appear the emerging market will get back on track anytime soon [for more ETF news and analysis subscribe to our free ETF Daily Roundup].

The chart below displays the last five annual returns for the MSCI Brazil Capped ETF (EWZ A-) and how the economy has struggled:

From 2010 to 2014, EWZ had an average annual return of -9.81%; from 2005 to 2009 that figure was 47.74%, a stark contrast. The poor returns come as GDP continues to disappoint, among other things. 2014 saw a trade deficit of $3.93 billion, the largest since 1998. Exports in 2014 dropped 7% while inflation continues to rise. The hefty costs of hosting the 2014 FIFA World Cup certainly did not do the country any favors. To put it simply, the Brazilian economy is facing a number of headwinds, none of which are quick fixes [see also A Deeper Look At Brazil’s Commodity Industry].

Looking forward to 2015, the outlook is not much better. GDP growth fell from 2.3% in 2013 to 0.15% in 2014, as the economy suffered a sharp slowdown at the end of 2014. Analysts are forecasting GDP growth of 0.5% for this year; while that may be higher than 2014, it is certainly not a number that is going to get the economy back on the right track, as it still lies on the brink of a recession. On top of that, inflation continues to rise, forcing the central bank to raise rates to attempt to keep prices at bay.

Brazil’s Prime Minister Joaquim Levy stated early this year that he will work to boost confidence and economic growth for 2015, but that has been easier said than done in previous years.

One thing investors will want to keep an eye on as the year unfolds is the price of oil and whether or not Brazil is a net importer or exporter. Depending on the month, Brazil has either been a net importer or exporter of oil over the last few years, failing to fall into any kind of consistent pattern. If Brazil is able to remain a net importer of oil and prices remain depressed, the economy could gain some traction. But if the nation becomes a net exporter with low oil prices, things could get even worse. Of course, if oil prices were to rise again, the reverse would be true for those two statements.

There are dozens of ETFs that track the Brazilian economy in one way or another. Below are three ETFs to watch in the coming year as Brazil’s economy tries to avoid another sluggish 12 months:

The Brazilian economy has had a rough go over the last few years, and unless it can make some major changes, 2015 will present the same challenges and anemic growth.