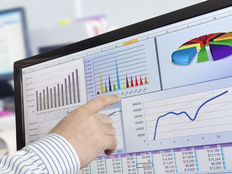 A New Way to Bet on Europe: Inside the STOXX Europe 600 ETF (STXX)

Europe’s sluggish recovery has been in the limelight for a number of years now, leading many to suspect that improving growth is that much closer. 2015 just might be the year that the ECB’s extensive stimulus efforts finally take root and inspire a meaningful recovery across the beaten down currency bloc. The ever-evolving nature of the ETF industry has in turn spawned a new way to gain exposure to this closely-watched region: meet the STOXX Europe 600 ETF (STXX A) from ALPS.

We recently had the opportunity to talk with Michael Akins, fund manager of STXX, about the inspiration behind the recent launch as well as insights about what separates this product from existing European-focused offerings.

ETF Database: What was the motivation behind launching an ETF linked to the STOXX Europe 600 Index?

Michael Akins (MA): We were thrilled to partner on an ETF with STOXX, the premiere Index brand in Europe. In addition to a long track record dating back to 1998, the STOXX Europe 600 provides the most liquid, comprehensive and representative access to Europe. With the ALPS STOXX Europe 600 ETF (STXX) investors now have access to the standard benchmark for European equity exposure.

Investors are increasingly using ETFs to provide liquid, low-cost exposure to global markets. The proliferation of ETFs across different asset class, sectors and geographical segments of the market has allowed investors to make both tactical and strategic investment decisions with ease and precision.

Be sure to see our list of Europe Equities ETFs.

ETF Database: How is this ETF similar to existing Europe-focused funds? How does it differentiate itself?

MA: Though the STOXX Europe 600 gives investors access to European investment opportunities, unlike many cap-focused funds, this ETF accomplishes its exposure via a broad-based approach, covering large, mid and small caps. We believe the multi-cap, inclusive nature of the STOXX Europe 600 Index may be very suitable for investors that are seeking a more comprehensive exposure to Europe.

In our view, a comprehensive approach is preferable to a targeted strategy that may leave investors underexposed to certain segments of the equity market.

ETF Database: Broadly speaking, what are some noteworthy “green shoots” you see across Europe?

MA: Despite the delayed economic recovery in Europe throughout 2014, we believe there are several positive signs that may lead investors back to Europe in 2015. First, an increasingly dovish monetary policy across the region should start to bear fruit in 2015 as a slow labor market improves gradually. Furthermore, lower oil prices and a weaker euro should support better household spending growth and exports.

In addition to a gradually improving labor market, we believe the weak euro will start to boost exports and improve the investment climate in the major European economies of Great Britain, Germany and France. While tensions in Russia and Ukraine continue to pose geopolitical risks increase the probability of heightened volatility, we believe much of the risk to be priced in to European equities, making them attractive particularly on a relative basis to their US counterparts.

ETF Database: Building on the previous question, what are the biggest challenges facing Europe? How might the Fed starting to tightening its policy affect European markets?

MA: The combination of weak economic growth, falling currencies and ineffective monetary policy have failed to jumpstart the weak recovery that began in 2013. Investors have abandoned European stocks for US markets, where economic growth has been stronger. Europe still faces spillover effects from lackluster eastern European nation economies as well as from problems Russia faces due to sharp declines in oil prices and a resulting falling ruble.

Slowdowns in economies in Asia will make it more challenging for European exports. We believe the Fed tightening is focused on US economic numbers and, if the Fed were to tighten significantly in 2015, it would be due to a strong US economy. The dollar would remain strong and likely get stronger were the Fed to tighten in 2015 and that could have positive effects for European exports.

ETF Database: Given where Europe is in terms of the expansion-contraction cycle, what sectors do you expect to potentially outperform during the first half of 2015? In your view, are there any corners of the market that offer an asymmetric risk/reward opportunity at the moment?

MA: Given the recent commitment to a more dovish approach by the ECB, we believe that though it is delayed by several months, we may be finally heading into the early stages of a recovery in Europe during 2015. Typically this will favor consumer discretionary and financial sectors the most. We believe the consumer discretionary sector may benefit doubly due to lower oil prices. Industrials is also an area we would favor in the early stages of a recovery and considering lower energy costs.

We see favorable risk/reward dynamics in transportation, autos, household durables and diversified financials. We believe the STOXX Europe 600 will give investors a way to access favorable sectors in Europe throughout 2015 as well as during all stages of the business cycle.

There is always some uncertainty when it comes to forecasting future growth expectations, and especially so in the current environment where we have witnessed unprecedented interventions on the part of central banks. With that in mind, there are a number of fundamental catalysts and tailwinds in motion that point to better days for European markets. As such, the recently launched STXX ETF warrants a closer look from anyone looking to favorably position themselves in anticipation of a rebound across Europe.