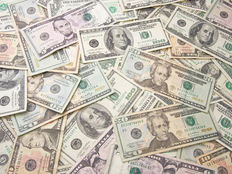 The U.S. dollar has continued to gain ground against major foreign currencies, resulting in the DB USD Index Bullish ETF (UUP B) rising roughly 16% over the trailing 6-month period. The greenback’s strength, however, does have some macroeconomic impact that investors should be aware of.

UUP on the Rise

As mentioned, the fund has seen a significant uptick in recent months. To put things in perspective, below is a chart of DB USD Index Bullish ETF since 2007, before the financial crisis (data as of 2/13/2015):

UUP’s price is nearing its all-time high of $27.08, gained back in November of 2008. Since bottoming out in 2011, however, the fund traded in a narrow range up until mid-2014, when it skyrocketed from about $21.30 a share to approximately $25.00 a share. While a range of $4.00 may not seem significant, in currency markets this has significant and material impact on much broader macroeconomic factors.

What a Strong Dollar Means for Investors

While a stronger U.S. dollar may seem beneficial for the domestic investor and/or consumer, there are some significant implications of a rising dollar that investors need to understand:

Already, we’ve seen the consequences of a rising dollar; on Friday, the Labor Department reported that U.S. import prices have fallen 2.8% from December, the biggest decline since 2008.

Another key factor to consider is that a stronger U.S. dollar can also negatively impact the profitability of U.S.-domiciled companies. In today’s economy, a vast majority of U.S. companies have operations located outside of the U.S., sell products or services abroad, source workers from other countries, and even purchases raw goods or materials from foreign suppliers. The result is that investors of the U.S.-domiciled companies will almost always have some sort of exposure to non-dollar currencies.

If you’ve taken a close look at earnings this season, you may have noticed several companies reporting worse-than-expected foreign sales and lower profits due to currency fluctuations against the rising dollar.

While a stronger U.S. dollar may be beneficial for some corners of the economy, investors must realize how such a rise could potentially negatively impact portfolios with either direct or indirect exposure to foreign currencies. Be sure to take the time to analyze how a strong dollar and currency fluctuations can affect your holdings.