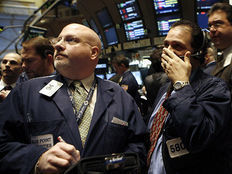 How the Low-Volatility ETF (SPLV) Disappointed on Black Monday

Steep, sharp, and short-lived are perhaps the best non-expletive words we can use to describe the stock market plunge seen on August 24, 2015, now dubbed “Black Monday”.

It’s because of market downturns like this that many investors have embraced low-volatility funds; this refers to ETFs designed to follow the lowest volatility subset of stocks from a broader universe, essentially designed to provide broad-based market exposure with a lower risk profile. In this case, we’re going to examine how the S&P 500 Low Volatility Portfolio (SPLV A) held up during one of the nastiest days on Wall Street in recent history. First, let’s examine the backdrop.

The stage was set for a nasty open on Monday morning for Wall Street as selling pressures carrying over from Friday, intensified by weakness in the Chinese market over the weekend, combined to form what is best described as a massive wave of liquidation. Furthermore, given the prevalence of algorithmic and trend-following trading systems in the market, it’s not surprising that the initial wave of sell orders triggered stop-losses for countless other programs that only added depth to the plunge seen across the market.

Here’s where things get interesting, and by that I mean ugly. On Monday morning, the New York Stock Exchange invoked something called “Rule 48,” a measure designed to smooth out trading during turbulent times. Rule 48 is only used in the event that extremely high volatility is likely to have a floor-wide impact on the ability of market makers to disseminate price indications before the opening bell. By enacting this rule, the NYSE essentially sped up the opening process by effectively suspending the requirement that calls for stock prices be announced at the market open.

When Low Volatility Isn’t So “Low”

The implications of invoking Rule 48 were quite severe for securities on August 24, 2015, and left many pulling their hair in the first few minutes of trading. When we consider how the S&P 500 Low Volatility ETF (SPLV) behaved on the Friday prior to the 24th, there’s nothing out of the ordinary of which to take note; as expected from a relative performance perspective, the low-volatility counterpart SPLV fell 2.48% whereas SPY sank 3% on the day.

Monday proved to be much uglier, however, for the low-volatility fund. Consider the five-minute chart below which showcases trading activity in SPLV from Friday through Monday:

To put the “V” in the above SPLV chart into perspective, consider how this ETF held up compared to its unfiltered, broad-based counterpart, SPY:

Shareholders of this ETF were likely left scratching their heads wondering how their so-called “low-volatility” ETF got beat up more than the broader market. The truth is, there isn’t necessarily a “right” explanation here. Ultimately, absurd volatility at the market open on Monday led to huge price gaps in a number of generally low-beta, large-cap securities, which then transpired into more price volatility for the ETFs that hold these securities, SPLV included.

No matter which way you slice it and dice it, in this instance, granted it was an extremely rare trading day, the low-volatility appeal of SPLV had essentially eroded away. While this isn’t meant to serve as a knock on the long-term appeal and merits of the fund, it is a spotlight on how the ETF performed much worse than one may have expected during a day when conservative investors were likely hoping their low-volatility positions would hold up better than the broad market.