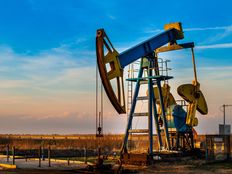 What’s Next for Oil ETFs?

While oil prices may be showing signs of life in recent days, investors would be unwise to ignore the looming fundamental headwinds that still plague the commodity.

It really feels like oil prices may be bottoming out for real this time…just as it has the other times.

Crude oil prices are rebounding as investors have seen glimmers of hope for shrinking supply. Earlier this week, the two biggest producers in the world, Saudi Arabia and Russia, agreed to freeze oil output, albeit near record levels. Most recently, oil bulls cheered on news of Iran welcoming the Saudi-Russian oil production freeze talks. The only problem is that Iran hasn’t formally agreed to any production cut levels, all it has done is voice its support.

Oil prices have also rallied on the news of declining inventories based on the latest API weekly data.

Consider the one-year returns for oil, energy stocks, and MLPs, as represented by (USO B), (XLE A), and (AMLP A-) respectively:

The key takeaways here are the following:

Investors are pricing energy stocks (XLE) at “can’t get any worse” prices as evidenced by the significant divergence seen between oil and equities in recent months.

To recap, the fundamental outlook for oil-related assets remains quite murky. Any short-term votes of confidence, whether it’s production cuts or signs of improving growth, have deteriorated in the face of a persistent global supply glut met with lackluster demand.

From a technical perspective, USO, XLE, and AMLP all share two defining characteristics:

On an individual basis, XLE appears to be the strongest in terms of price action at the moment; this ETF has held above January 20, 2016 lows, whereas XLE and AMLP failed to do so in February.

The trick here lies in not forgetting what the long-term trend at hand is. In the case of oil-related assets, trend followers would have to agree that the bears remain in the driver’s seat.

When you put it all together, the energy market is ripe with opportunity for nimble traders who can navigate the choppy price action that is likely to persist here. On the other hand, conservative investors would be better off resisting the urge to go all in on what appear to be bargain-priced assets; as we’ve seen already, what’s cheap can get even cheaper.

There are a number of commodity and equity-based vehicles from which to choose:

On the equity side especially, traders can slice and dice the investable energy stock universe in a variety of ways:

Don’t forget that a risk inherent to value investing is that what’s cheap today can always get cheaper tomorrow. If you must take advantage of lucrative prices in the energy sector, resist the urge to go all in at once. Instead, practice scaling into positions to avoid getting washed out in the event of another leg lower for crude oil prices.