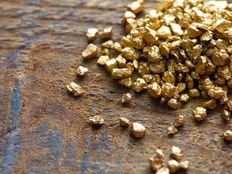 Gold prices have rallied more than 15% over the past year, which includes a 12% rally over the past month. With growing global uncertainty, these moves shouldn’t come as a surprise to investors. Negative interest rates in Europe and Japan have made gold an attractive safe-haven asset, while investors are looking to hedge against the risk of a Brexit and an ongoing slide in crude oil prices that could jeopardize the U.S. economic recovery.

Many exchange-traded funds (ETFs) in the sector have followed the commodity higher as investors flocked to the safe-haven asset class. The SPDR Gold Trust (GLD A-) – the largest ETF in the space with $30 billion in assets under management – jumped 15.5% so far this year. The fund saw net inflows of nearly $4 billion compared to net outflows from the S&P 500 SPDR (SPY A) of about $3.5 billion since the start of the year.

In this article, ETF Database takes a look at some of the drivers of gold prices and where the prized commodity may be headed in 2016.

Many investors are critical of gold as a safe-haven asset because it doesn’t offer any yield and there’s a cost associated with storing it. By comparison, sovereign bonds offer attractive yields and little risk of default. The problem is that interest rates have turned negative in Europe and Japan and investors aren’t seeing any yield. Even worse, there’s no sign of yield returning to these regions as inflation remains well below central bank targets.

The U.S. dollar is the first choice when there’s a flight to safety, especially after the Federal Reserve hiked interest rates last year. With slowing corporate earnings, the prospects of future rate hikes have diminished and the U.S. dollar was among the worst-performing major currencies over the past month. The British pound was the only exception with a 2.3% relative decline thanks to concerns over a Brexit – hardly a safe haven in its own right.

Gold prices have been benefiting from favorable supply and demand economics since late last year. According to the World Gold Council, gold demand jumped 4% during the fourth quarter to a 10-quarter high of 1,117.7 tons, driven by central banks (33 tons) and investment (25 tons) and offset by a marginal drop in jewelry (-6 tons). On the supply side, annual mine production increased by the slowest rate since 2008, and total supply fell 4%.

More recently, the financial sector has been accelerating its gold buying. According to the latest Commitment of Traders report, money managers increased long positions by 5,160 contracts to 126,219 and reduced short positions by 15,217 contracts to 45,206. The $4 billion in net inflows to a single gold ETF has also likely been a key driver behind rising demand for physical gold since many such ETFs are required to hold physical gold reserves.

Gold prices may also be benefiting from the Brexit concerns. On the one hand, the heightened uncertainty could be encouraging investors to hold the substance. On the other hand, Brits themselves have been buyers of the commodity. According to BullionVault data, the number of new U.K. users jumped 122% ahead of its 2015 average with the average transfer size being equal to roughly $12,000 – perhaps in preparation of an exit from the European Union.

Gold prices have rallied more than 15% since the beginning of the year driven by negative interest rates and favorable supply-demand economics. With the commodity headed higher, investors may increase their positions in gold ETFs, which could impact the physical market and drive prices even higher. This cycle could ultimately put an end to the long-term gold bear cycle driven by attractive yields following the 2008 economic crisis.

FLGR Could Be a Low-Fee Foreign Equities ETF to Watch