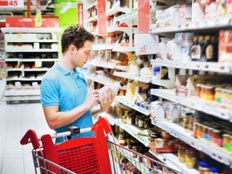 The past year has been a rocky one for the markets. In an environment of collapsing commodity prices in the U.S. and the threat of declining growth in the emerging markets, investors sought safety in defensive plays like the consumer staples and utilities sectors. These sectors performed much better than others in the market, such as energy and health care. As a result, exchange-traded funds (ETFs) that track these sectors have outperformed the market this year.

Going forward, this could pose a problem for investors because defensive ETFs such as XLP and XLU may be overvalued.

The bearish view is complemented by the prospect of slowing earnings growth in these sectors. Operating earnings in the S&P consumer staples sector is projected to rise just 4.07% in 2016. At the same time, the overall S&P 500 Index is expected to grow operating earnings by 18.24% this year. Separately, the utilities sector is valued at a price-earnings growth (PEG) ratio of 3.8; a ratio below 1.0 indicates an undervalued security. The S&P 500 Index as a whole is valued at a 1.97 PEG ratio.

It will be difficult for consumer staples and utilities to grow earnings significantly enough in future quarters to justify their lofty valuations. For example, Procter & Gamble (PG) suffered a 9% decline in revenue last quarter, year over year. Much of the damage was due to currency fluctuations. The strengthening U.S. dollar has eroded sales growth achieved in international markets. Similarly, Colgate-Palmolive (CL) posted a 7.5% decline in total revenue last quarter.

As such, it is likely that investors will become unsatisfied with defensive ETFs going forward. In turn, investors may seek higher levels of growth elsewhere in a sector rotation out of consumer staples and utilities and into other sectors and ETFs with greater growth potential. Moreover, if future interest rates are set to rise, high-yield ETFs such as XLP and XLU may become less attractive.

The reason why the XLP and XLU ETFs were such strong outperformers over the past year is partly due to low interest rates. The U.S. Federal Reserve recently raised interest rates for the first time in nearly a decade, but rates are still near historic lows. Consequently, investors are starved for yield and have bid up prices of nearly any asset class that offers significant yield. Indeed, the XLP fund has a dividend yield of 3.09% and the XLU fund has a 3.26% dividend yield.

It is true that investors favor utilities and consumer staples stocks because of their high dividend yields. But the downside risk for these funds outweighs their attractive dividend yields.