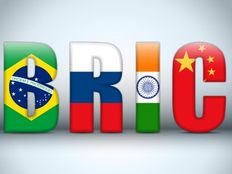 Is the BRIC Getting Heavy?

With emerging markets taking a dive early into April, many investors are finding themselves questioning if the recent run-up was owed to improving fundamentals or inflated optimism.

Buying something just because it’s “cheap” often turns out to be more costly of a strategy than most investors initially believe.

Each of the BRIC nations has lured bargain hunters in recent years, offering gains only to those nimble enough to lock in profits. From an intermediate-term perspective, the picture for this group has been murky at best.

Over the past five years,

All too eager bottom-fishers and deep-value seekers with no regard for the overarching fundamental headwinds have been punished as evidenced by the BRIC’s uninspiring price trends in recent years.

GDP is contracting at around 6% annually and the nation is still facing stiff recessionary and corruption headwinds. While recent political developments are encouraging, it’s still too early, and perhaps too optimistic on investors’ part, to tell if there will be meaningful changes that promote stability and inspire growth.

The Russian economy is contracting at around 4% annually, hurt largely by weak oil prices and weak conditions in its neighboring EU and China trading partners. While they certainly have room to do so, Russia’s central bankers are giving few reasons for investors to count on a rate cut. This sort of hawkish policy amid a fragile economic backdrop appears mismatched.

India’s GDP is growing briskly at around 7% annually, taking the spotlight in the BRIC group when it comes to economic growth. Reform efforts are strong and aimed at manufacturing, an important and largely underdeveloped sector of the nation’s economy.

While manufacturing remains weak, financial reforms and the continued commitment on the part of policymakers has proven encouraging for investors. Plus, China’s dominance on the global stage is unmatched by Brazil, Russia and India.

Be sure to read Why India Is Still Playing Catch up to China.

Putting it all together, the BRICs as a whole have stubbornly lackluster fundamentals matched with pro-growth initiatives on the policy front; whether any of these reforms actually take root is something investors will have to keep an eye on as time goes by. Ultimately, investors will have to do their own homework to uncover any meaningful signs of whether or not long-standing headwinds plaguing the BRIC pack may be scattering for good.

Under the Hood of BRIC ETFs

Back to the charts. Let’s see how BRIC has performed versus EM as a whole since the February lows:

There is a notable performance gap among the three ETFs tracking the same markets. As they say, the devil is in the details; in this case, it’s the country breakdown details.

Now consider the below comparison capturing the same time frame as highlighted in the returns chart above, this time looking at performance on a country-specific level.

Now we can conclude that EEB has been a clear winner among BRIC ETFs within the scope of the most recent rebound, given its more favorable tilt towards two of the best-performing markets from the pack, Brazil and Russia; furthermore, this ETF also maintains a notably smaller allocation to China, a laggard in this instance, compared to its peers.

In addition to the broad-based BRIC funds and a few of the single-country ETFs highlighted above, investors should also consider the following lists:

Recent gains for the BRIC group are encouraging, but the bearish price trends over a multiyear horizon and slowly changing fundamentals remind us to remain cautious. If you’re going to dive into emerging markets, and especially after their recent run-up, it is recommended you do so in baby steps and scale into a position, as opposed to jumping all in.