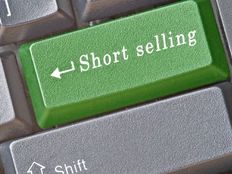 3 Heavily Shorted ETFs & What It Means for Investors

The S&P 500 has risen more than 10% since its February lows, but that hasn’t stopped short sellers from betting on a reversal. According to ETF Channel data, 10 popular exchange-traded funds (ETFs) have short interest exceeding 50% of outstanding shares.

Below, ETF Database takes a look at some of the most heavily shorted ETFs, potential reasons for the bearish sentiment, and considerations for investors.

The Market Vectors Semiconductor ETF (SMH A-) is the most heavily shorted ETF in the market with 207% of its shares being shorted. While the ETF has risen 2.33% so far this year, traders are betting that the sector will move lower over the near term.

The technology sector has been struggling after posting lackluster first-quarter earnings. On April 26, Apple Inc. (AAPL) reported a 13% drop in quarterly sales in its first revenue decline in 13 years. Samsung Electronics (SSNLF) was expected to fare marginally better in its first quarter, with estimates of 4% quarterly revenue growth, but its chip division was expected to report a 15% year-over-year drop in a sign that the semiconductor market may be slowing. Indeed, when Samsung reported earnings yesterday, operating profit fell 6% in the chip division.

The semiconductor industry is widely considered to be a leading indicator for the technology sector and broader economic demand, which means that the bearish bets on the ETF may be due to more than just a projected fall in semiconductor earnings.

The SPDR S&P Retail ETF (XRT A) is the second most heavily shorted ETF in the market with 153% of its shares being shorted. While the ETF has soared more than 5.6% so far this year, the bearish bets suggest that traders are betting on a retail downturn.

The retail sector has experienced a turbulent first three months of the year with sales falling 0.4% in January, remaining flat in February, and falling another 0.3% in March (see Figure 1). At its core, the slump can be attributed to a slowdown in the automotive sector, which has historically been a key driver of retail sales. Core retailers – like Office Depot (ODP) – have also struggled this earnings season with a 1% drop in sales and a penny miss on earnings.

The retail sector is another benchmark for the overall economy with a skew toward the health of the consumer. While the employment situation appears to be improving, wages have been mostly stagnant and consumer sentiment has fallen in recent readings.

The SPDR S&P Biotech ETF (XBI B-) is the third most heavily shorted ETF in the market with 90% of its shares being shorted. Unlike the two aforementioned funds, the ETF has fallen more than 20% so far this year amid weakness in the biotech space.

The biotech industry has suffered from a combination of various factors, including lofty valuations relative to the S&P 500 and bearish fundamentals. In terms of valuation, XBI trades with a forward price-earnings ratio of 19.31x compared to the S&P 500 SPDR’s (SPY A) 17.27x – and that’s after XBI’s significant slide. The bearish fundamental picture comes from a combination of lackluster earnings from blue-chips and drug failures among development firms.

The biotech sector is a proxy for growth stocks and tends to outperform when the economy is improving, which could be another reason for the extended selloff as investors bet on a protracted slowdown rather than a robust rebound.

Traders have shorted several different ETFs focused on various sectors, but the most acute targets were semiconductors, retail, and biotech funds. While there are many possible reasons for the bearish sentiment, the common thread is that all of these funds represent leading bets on the health of the U.S. economy, which is being called into question by recent data. Investors should take note of these sentiments when analyzing their own portfolios.