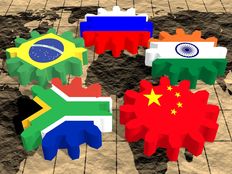 Since staging a strong reversal in Q1 of this year, emerging markets are once again at the top of sellers’ lists, leaving many to wonder if current weakness is just part of the larger downtrend still at hand, or if this is a buying opportunity in disguise before the next rally.

Before we can try to answer whether or not this dip is a buyable one, let’s see what has changed for emerging markets this year in the first place.

Emerging markets started the year off on shaky footing after succumbing to stiff profit taking pressures as a result of the Fed kicking off monetary tightening last December. However, this asset class was quick to change course as rate hike expectations eased up considerably in light of lackluster U.S. economic data releases.

In other words, as the U.S. dollar lost steam, EM found buyers enthusiastic to take advantage of multi-year low prices in overseas equities. One piece of evidence is the overwhelmingly bullish reaction seen in the EM equity space on March 16th when the Fed dialed back rate hike projections, sending the broad-based (EEM A-) 2% higher on the day.

The emerging markets rally in Q1 2016 was largely due to a falling U.S. dollar more so than a dramatic change in growth expectations for the developing economies themselves.

Why has EM momentum Reversed?

With the U.S. dollar on course to change in direction the other way, it’s no surprise that EM is in the limelight yet again. Positive momentum for the greenback is once again pressuring developing equities lower, as seen on:

Emerging markets momentum has reversed recently as a result of the oversold U.S. dollar picking up steam and staging a reversal amid overly-hawkish rate hike expectations.

Emerging markets, as represented by (EEM A-), have gone more or less nowhere over the past decade (-7%) and remain stuck in bear market territory over the past five years (-31%).

The key takeaways here are:

While it’s encouraging to see EEM’s 100-day average flattening out and even rising in recent weeks, the fact that the longer-term trend continues to slope downward is worrisome. Anyone looking to take advantage of discounted prices should do so with caution given the overarching bear market at hand here.

In addition to broad-based funds, there are a number of country-specific options, with some of the most popular ones covering:

Emerging markets have staged a powerful reversal in 2016 although it appears to have been fueled largely by a decreasing dollar more so than an improving economic growth outlook. This leads us to believe that the current dip, albeit a lucrative one, is simply a distraction in the long-term downtrend that persists. Investors will need to see a combination of decreasing dollar and improving fundamentals for a more trustworthy rally.