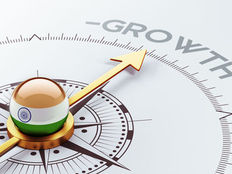 The Rise and Rise of India: A Long-Term Play

Investors looking to increase their exposure to emerging markets might consider India in particular, as this budding economic giant offers a compelling opportunity for those with a stomach for volatility and a long time horizon.

Below we’ll take an introductory look at the major points of appeal, drawbacks and nuances when it comes to investing in India; as well as the key considerations when it comes to choosing the most appropriate ETF for the job.

The Many Tailwinds for India

India’s economy stands at the intersection of several growth trends, many of which are still in their infancy.

India’s population is not only large – it sits only behind China, at over 1.3 billion – it’s also young and growing. According to the World Bank, in 2015, India’s annual population growth rate stood at 1.2% versus the United States’ 0.8%; furthermore, the percentage of people aged 14 or below was 29% compared to the United States’ 19%. Put another way, more than a quarter of India’s population has yet to enter the professional working age – and this number is growing at an increasing rate.

The growing population translates not only into increased output potential but into growing consumption as well. India’s consumer story is very appealing, if not only because of its sheer size. According to Goldman Sachs, some 440 million Millennials and 390 million Generation Z (born after 2000) will contribute to the growing and rapidly urbanizing middle class.

Another defining feature of India’s booming population – which distinguishes it from other nations with higher growth rates – is the quality of education. According to the World Bank, India possess a highly developed education system spanning across virtually all disciplines; in fact, the nation’s education system ranks only behind that of China and the United States.

Based on GDP ranking by purchasing power parity, which makes for a fairer comparison than nominal terms (which doesn’t take into account relative cost and inflation among other things), India stands in the number three spot, at $8.0 trillion behind the United States ($17.9 trillion) and China ($19.5 trillion).

In terms of annual GDP growth, the 10-year graph below makes it clear why India falls in the emerging markets bucket:

The nation’s economy has a track record of expanding anywhere from 4% to upwards of 10% annually.

India boast a very stable government by emerging market standards, and the nation’s policymakers have been pursuing pro-growth initiatives. This includes everything from robust spending on infrastructure and R&D to lower corporate taxes.

As with other emerging markets, technology is accelerating India’s economic growth in ways that the now-developed world simply didn’t bear witness to in the past. For example, the internet – specifically mobile connectivity – is helping to drive ecommerce in India. This trend alone is essentially leapfrogging the brick-and-mortar retail growth phase that now-developed economies underwent.

Simply put, the global advance of technology is only helping to push India’s potential further and further along.

Lucrative growth often comes with higher risk, and the case for investing in India is no different.

Based on the 2015 Corruption Perception Index (0 = highly corrupt, 100 = very clean), India is in the lower half of the spectrum with a rating of 28; by comparison, the United States has a rating of 76.

India’s stock market (see below) has undeniably been in a bull trend over the past decade; however, this has come with a fair share of volatility.

Consider the following comparison between a long-standing India ETF (EPI C+) and the S&P 500 (SPY A):

Investors who prefer small and infrequent fluctuations in their positions will probably not withstand the emotional rollercoaster of allocating to India. Funds tracking this nation can be expected to deliver bigger swings than traditional U.S. equity benchmarks – this means potential for much greater gains, as well as much greater losses in any given time period.

The volatility of this asset class may be enough to deter many, and thereby limit investment flows.

India may be fairly stable, but its proximity to the Middle East leaves it vulnerable to geopolitical risk whenever tensions in the historically turbulent region flare up. This means that investors often liquidate India ETFs whenever there’s trouble in the region, even if it doesn’t involve India directly.

Similarly, India’s close ties with China (its biggest trading partner by total trade) leaves the nation vulnerable to closely following in the footsteps of its larger brethren. As they say – when China sneezes, other emerging markets catch a cold. Whether it’s justified or not, fears over stability and growth in China often transpire to volatility for India ETFs.

In essence, like other emerging markets, India is often “guilty by association” when it comes to de-risking waves in the global equity market.

The high volatility of India’s market shouldn’t deter conservative investors completely, since ETFs allow for varying degrees of exposure. That is to say, investors can opt for either a country-specific ETF if they want to go “all in” on India, or alternatively they can go for a broad-based EM equity ETF that features partial exposure to Indian equities, allowing them just to “get their feet wet” so to say.

Consider the following pros and cons for targeted instead of partial exposure to India:

Ultimately, your own investment objectives should inform your product selection decision. For simplicity’s sake, more risk-averse investors are probably better off going with a diversified emerging markets ETF in lieu of an India-specific one. The opposite is true for those capable of taking on more risk.

Be sure to also use the Free ETF Country Exposure tool to drill further into the allocations made to India by various funds.

Investing in India holds great fundamental appeal given its strong demographic tailwinds, track record of robust growth and technological tailwinds. This is an opportunity best suited for long-term investors however, due to the volatile nature of India’s stock market in the short- and medium-term. Investors should consider utilizing a broad-based ETF to gain exposure to this booming economy, if they don’t feel comfortable undertaking the dramatic ups and downs associated with a country-specific investment.

Be sure to take a good look under the hood before pulling the buy trigger on any one ETF.