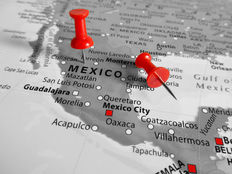 One way or another, Mexico has taken the first spot in the list for the second consecutive week, serving as an odd reminder that the U.S. is in the middle of a presidential election. The Japanese yen is second in the list, grabbing the headlines for its performance on the back of the BoJ inaction. It is followed by infrastructure, which unsurprisingly is a hot debate topic in this campaign. Gold miners and silver miners are also influenced by the presidential election, but both metals have fallen lately on bets that the Federal Reserve will increase rates.

Mexican Peso: A Gauge for the U.S. Presidential Campaign

The Mexican peso has been the most popular asset class among our readers, with a nearly 120% rise in viewership. In a peculiar way, Mexico has become a gauge for who is trending in the presidential election in the U.S. If the Mexican peso falls, this is interpreted as a sign Donald Trump is narrowing the gap against his opponent Hillary Clinton, whereas if it’s rising, the opposite is true.

Last week, ETFs exposed to Mexico also took first place, because they were falling on the back of a surging Trump. This week, Mexico has better news. After Trump apparently lost a presidential debate against Clinton, the Mexican peso, for example, rose as much as 2%, while iShares MSCI Mexico Capped (EWW A), an ETF fully exposed to the Mexican stock market, has jumped 3.43% since September 26, when the debate aired. The gains helped the iShares MSCI Mexico to swing slightly into positive territory since the beginning of the year.

Trump has promised to sever economic ties with Mexico if he becomes president, calling the North American Free Trade Agreement (NAFTA – a trade union composed of Canada, the U.S. and Mexico) the worst trade deal the U.S. has ever signed. Such statements have spooked investors in Mexican assets, given that about 80% of the country’s exports go to the U.S.

However, Mexico has little to fear, as per the market reaction to the debate. Markets all over the globe, including Mexico’s, jumped in a sign investors thought Clinton had won. But smart money could be wrong, as recently demonstrated by their interpretation of the Brexit vote. A clearer picture of who was victorious in the debate will emerge this weekend, when new polls will be available.

Japanese Yen: A New Approach From the BoJ

The Japanese yen has rallied for the third consecutive week versus the U.S. dollar on a key disappointment from the U.S. Federal Reserve and relative inaction from the Bank of Japan, prompting a strong 61% rise in traffic. Market participants believe that an underwhelming policy from the BoJ will favor the yen, given previous expectations of an expansion in the bank’s Qualitative and Quantitative Easing (QQE) policy. Investors seeking to take advantage of the renewed yen strength can look towards Guggenheim CurrencyShares Japanese Yen Trust (FXY C), as it has returned a staggering 18.98% year-to-date.

Bank of Japan Governor Haruhiko Kuroda announced two notable changes. Officials will let inflation rise above their previous target of 2% and will establish a floor for the ten-year Japanese government bond yields. Pushing their inflation target higher makes little difference when the bank has thus far been unable to achieve their 2% inflation goal. Targeting a zero yield for the ten-year JGB is the more important – and arguably more controversial – move, largely because it finally tackles the deplorable state of Japan’s banking sector. The zero-yield target is viewed as a lending hand to the country’s banks and pension institutions, which have been struggling with low returns for decades.

Unfortunately for the Japanese policymakers, the initial rise in JGB yields has been reversed in the last few days, setting a rather tangled web around the whole decision-making process. Even though the central bank has left the door open for further easing, it may stay on the sidelines in the near future after expanding its ETF purchases at the July meeting. And in doing so, it may boost the appeal of the yen, particularly as Japan returns to its historical role as a net lender to the world economy.

Both presidential candidates agree on huge new infrastructure spending, as the race for the Oval Office escalates. So it comes as no surprise that infrastructure ETFs have seen a 55% rise in viewership over the past week, as investors bet that the next generation of roads and bridges will be built by whoever wins the vote.

Clinton’s $275 billion in direct spending on infrastructure over five years, plus another $225 billion in loans and loan-guarantee programs, and Trump’s pledge to pour $1 trillion in America’s steel and concrete backbone has refreshed investor’s appetite for relevant ETFs like iShares Global Infrastructure (IGF A). Although it has just 39% exposure to U.S. companies, iShares Global offers liquidity and a year-to-date performance of 18.47%.

Companies involved in building, repairing and maintenance operations are set to attract investor interest through the infrastructure stimulus program set up by policymakers, who are cheering the alchemy of the multiplier effect. To that end, FlexShares STOXX Global Broad Infrastructure (NFRA A) is a wise choice due to its exposure to a few large-cap companies, including the owner of the largest railroad network in the U.S., Union Pacific (UNP).

Gold miners have taken fourth place in the list, with 36% increase in viewership. It could be argued that gold miners could benefit from a potential Trump presidency largely because of a certain degree of uncertainty that his stated proposals could unleash. So the latest debate disappointed gold bulls, as Clinton was viewed as a clear winner and the shiny metal started to fall. For example, VanEck Vectors Gold Miners ETF (GDX B+), an ETF with 85% exposure to international miners, has fallen 3.59% over the past week, trimming year-to-date gains to 96%.

Political events usually don’t have long-term effects on gold prices. Traders, more likely, were weighing a potential rate hike by the Federal Reserve this year. If Clinton heads to the White House, the Fed may indeed raise rates this year, but the opposite could be true in case of a Trump presidency, which would inevitably boost gold prices. However, the Fed’s decision is not hinging solely on the political process. In the next weeks, some important economic indicators, including the jobs report for September and the GDP figures for the second quarter, could weigh definitely on the timing of the next rate hike.

The other fairly tracked precious metal has faced a volatile past couple of months with spikes and retraces. Silver miners ETFs have seen their traffic increase over 35% this week compared to the same period a week ago, as investors kept in mind the astounding 140% year-to-date increase of Silver Miners ETF (SIL B-) or the even more spectacular 201% rise of another silver mining-related ETF – PureFunds ISE Junior Silver (SILJ C+).

Aside from the political factor or the increasing possibility of a rate hike by the Federal Reserve at the end of this year, silver makes more sense for investing as it is used in a greater fashion by the electronics, energy and auto industries, among others. And because the gap between silver and gold has become somewhat disproportionate, it makes sense that investors are seeking to diversify their commodity exposure beyond the most sought-after metal and choose silver.

This week has been all about the U.S. presidential debate, and a little bit about the Bank of Japan’s latest monetary policy tweak. The Mexican peso surged after Clinton came out as the winner of the presidential debate, while gold and silver miners have fallen. Meanwhile, infrastructure ETFs trended, because both U.S. candidates promised to invest fresh money into the crumbling infrastructure. Finally, the Bank of Japan’s latest tweak of monetary policy delighted yen bulls, which have seen their bets pay off.