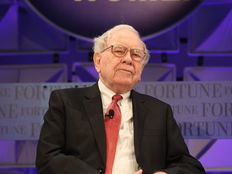 This is the first week in a long time that hasn’t been all about U.S. President Donald Trump. Similar to last week, investors turned their attention to economic fundamentals, as shown by the presence of airlines, cocoa and emerging market equities. However, the Dow Jones Industrial Average and uranium trended largely because of Trump’s promised expansionary policies and his rhetoric on nuclear weapons. Find our previous edition at Trending: Copper Skyrockets as Chilean Workers Launch Strike.

Airlines Get Boost From Berkshire

The news that Warren Buffett’s Berkshire Hathaway bought large stakes in four U.S. airlines has raised many eyebrows and prompted a 246% increase in traffic over the past five days. The $10 billion investment scattered over four companies is all the more surprising since Buffett himself said the industry was a “death trap” just a few years ago.

Unfortunately, we do not know whether it was Warren’s or his protégés’ decision to buy into the airline industry. Buffett’s protégés, Todd Combs and Ted Weschler, manage a portion of Berkshire Hathaway’s investment portfolio.

The U.S. Global Jets (JETS C+), which contains all the names acquired by Berkshire, has underperformed the S&P 500 so far this year by one percentage point, advancing 4.7%.

Just about three years ago, Buffett reiterated his view that the airline business was a bad investment due to a considerable loss he experienced in the 1990s with defunct US Airways. The industry has see significant consolidation since the early 1990s. Profitability has increased over the past five years at all four firms and their stocks have skyrocketed. For example, Southwest jumped more than 500% in the last half-decade.

For a deeper analysis on individual ETF investments such as (JETS C+) or (URA B-), use our ETF Analyzer tool. You can select ETFs by category or type as well as add individual ticker symbols to compare performance, expenses and dividend yield, among other metrics.

Berkshire’s investment is also a bet on a rising economy and improving incomes for consumers now that the labor market is becoming tighter and wages are rising. Overall, the airlines have become less volatile over the past years, and they are heavily exposed to the health of the U.S. economy and the U.S. consumer in particular.

Uranium Up on Increasing Demand and Dwindling Supply

Uranium has started a strong recovery this year from 12-year lows, on hopes of increasing demand from Asian countries and a Trump administration in the U.S. looking more favorably on the industry. Traffic to uranium ETFs rose 154% in the past week just as the commodity began a correction. Over the past five days, Uranium ETF (URA B-), a product containing leading producers, has fallen off a cliff by as much as 10%. Year-to-date, however, the ETF remains up a strong 34%.

The rally was sparked mostly by Kazakhstan’s decision to cut supply by 10% in a bid to prop up prices. The nation is the largest producer and is responsible for 40% of the global supply, followed by Canada and Australia. Uranium also received good news on the demand side, with Trump promising to revive the industry in the U.S. However, with natural gas continuing to be dirt cheap, the U.S. uranium industry may not see a sudden uptick.

Over the long term, falling demand in Japan – the nation decided to abandon nuclear energy after the Fukushima catastrophe in 2011 – may be compensated by rising demand in China and India. China, in particular, is eagerly looking for alternative ways to generate energy as pollution from its coal-operated plants makes its cities uninhabitable.

Dow Jones Industrial Average has seen its traffic rise as much as 147% over the past week, taking first place on the list. The main U.S. index has continued to rise, in a sign optimism about Trump promised expansionary policies is still running high, despite recent setbacks. SPDR Dow Jones Industrial Average (DIA B+) has jumped nearly 1% since last Thursday, extending its year-to-date rally to 5% and hitting new record highs.

Trump himself recently commented on the index crossing the 20,000 points threshold, saying he is very “proud” of this achievement. He added that the Dow Jones should continue to go up from these levels. The main thesis for the rally remains unchanged: investors have been cheering Trump’s commitment to ditch regulations, cut taxes and increase infrastructure spending. The index has also been boosted by recent strong economic data across the board, including improving labor markets and rising wages.

Cocoa ETFs have seen their viewership rise 99% over the past week, as readers rushed to check the drama unfolding in the industry. iPath Bloomberg Cocoa Subindex Total Return (NIB A+) has continued to be in a bear market this year, down nearly 10%.

Hopes of bumper crops in West African countries and lower-than-expected demand elicited the woes, as many chocolate producers cut down on cocoa usage by selling smaller bars or using alternative ingredients. Analysts believe that low prices are here to stay, with the oversupply potentially lingering for another two years.

Low prices, however, may force some African farmers to shift toward growing rubber or other commodities, while others may choose to work in gold mines, likely putting pressure on prices over the long term. ETF Database has ETF investing guides and other eBooks to help you navigate the investing landscape using ETFs. Sign up to ETF Database Pro to get access to all the PDFs located on our ETF Guides page.

Emerging markets have been hot lately, despite ominous signs stemming from rising interest rates in the U.S. and a potential trade war. The asset class has seen 89% more viewers this week compared to the last one, as many countries’ equities continued to rally. Vanguard FTSE Emerging Markets (VWO A+), an ETF heavily exposed to the Chinese and Indian economies, rallied 1% over the past week, extending year-to-date gains to as much as 10%.

Investors have cheered China’s strong economic growth, India’s promised reforms, the Brazilian government’s pledge to implement market-friendly reforms, and the potential thaw between Russia and the U.S. Recovering commodity prices have also helped, particularly boosting Brazil and Russia. Concurrently, investors apparently chose to ignore Trump’s rhetoric and the potential trade war between the U.S. and China. To easily find ETFs exposed to a particular country, check our ETF Country Exposure tool. Select a specific country and get a list with all the ETFs with exposure to your pick.

This week, Berkshire Hathaway made the news by unexpectedly disclosing a large investment in U.S. airlines. Uranium trended due to a rally caused by a supply cut in Kazakhstan, while cocoa ETFs fell on fears of a supply glut in West Africa. The Dow Jones reached new highs and emerging markets continued to be favored by investors on hopes that China will continue to grow.