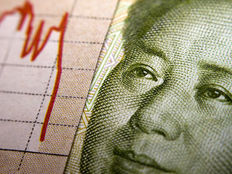 The growing pile of China’s internal debt has finally prodded credit ratings agency Moody’s to downgrade the country’s sovereign bonds. China is first in the list this week, slightly above Aerospace and Defense, which got a boost from an arms deal between the U.S. and Saudi Arabia. Platinum took the third spot and short-term bonds followed. Finally, crude oil dropped again this week on news of rising output.

China took first place on the list this week, with a 73% increase in viewership. China’s exponentially rising debt has finally caught the eye of credit ratings agencies. Moody’s downgraded the country’s sovereign bonds by one notch, in what was the first relegation since 1989. However, the downgrade has failed to arrest a rally in Chinese stocks. iShares China Large-Cap ETF (FXI A) has advanced nearly 2% since last Thursday, extending year-to-date gains to as much as 16%.

Moody’s said its downgrade decision was driven primarily by the rising internal borrowings. China’s internal debt has been increasing at a very fast pace since the financial crisis, as the government tried to maintain the astonishing rate of economic growth. Unfortunately for the Chinese, the debt would have to advance further in order for the nation to keep growth rates of 6% over the coming years, according to Moody’s.

China’s debt, as a percentage of economic output, now stands at around 283% compared to around 160% in 2009. A large part of the debt consists of loans made by government-owned banks to state-owned enterprises, most of which may have a hard time paying it back. Even more worrisome, this may not be the true picture of the total debt. China has a thriving shadow banking industry that is harder to quantify. For example, traditional lending increased 10% last year, but other speculative categories of loans shot up 21%. Meanwhile, the country’s economic growth stood at just 6.8% last year.

Fortunately, China has large foreign reserves and could withstand a mild economic shock. However, if its debt continues to increase, the $3 trillion hoard may not be enough to stave off a crisis.

Defense and Aerospace ETFs have seen their viewership rise 64% since last Thursday, as the sector continues to be hot. The latest bullish news is a ten-year deal between the U.S. and Saudi Arabia that was closed during President Donald Trump’s visit to the Middle East. Under the agreement, Saudi Arabia will buy $350 billion worth of military equipment from the U.S. over the next ten years, and $110 billion will take effect immediately. iShares U.S. Aerospace & Defense ETF (ITA B+) has rallied more than 2% since the accord was sealed, extending year-to-date gains to over 11%.

The deal with Saudi Arabia comes shortly after the U.S. government itself promised to boost military spending by 10%. Trump’s calls on European allies to boost their defense budgets were heard, and many NATO countries are now committed to reaching the 2% of GDP threshold indicated by NATO, although not as fast as the U.S. President would like. All in all, Defense and Aerospace ETFs should continue their rally in the near term, particularly during the Trump presidency and as geopolitical tensions increase.

Platinum is third on the list, with a modest 52% increase in viewership. News of dropping output and rising demand from retailers have failed to stem a rally in the precious metal, which has been suffering from a chronic supply glut. ETFS Physical Platinum Shares (PPLT A-) has risen slightly over the past five days, reducing 12-month losses to about 1.3%. Platinum’s long-term performance is disappointing, with (PPLT A-) down as much as 43% over the past ten years.

According to Platinum Guild International, retail demand for the precious metal has increased in 2016, with India’s advancing by 11.4% and America’s growing by 5.4%. Demand was primarily driven by jewelry manufacturers, which represent the second-largest market for the metal after automakers.

The news of rising demand came as South Africa reported lower output, as many companies began closing unprofitable mines. Still, a lot of miners are, in effect, subsidizing loss-making mines with profitable ones on expectations that prices will recover.

For a deeper analysis on individual ETF investments such as (PPLT A-) or (ITA B+), use our ETF Analyzer tool. You can select ETFs by category or type as well as add individual ticker symbols to compare performance, expenses and dividend yield, among other metrics.

Short-term bonds have seen their traffic increase 40% over the past week, as worries linger about their performance in the face of disinflation concerns in the U.S. Demand for short-term bonds usually spikes in a rising interest rate environment, but slowing inflation of late coupled with disappointing macroeconomic data may prompt the Federal Reserve to stay put for a while. The most recent Fed minutes suggested policymakers were in agreement that rates should be raised soon, probably in June. However, members of the FOMC want first to see clear signs that recent economic weakness was transitory.

U.S. inflation fell from 2.7% in February to 2.2% in April, raising analysts’ eyebrows. Falling inflation is not helping short-term bonds, which are appealing in times of rising interest rates and inflation because of their short maturities. This is evident from the performance of the Vanguard Short Term Bond ETF (BSV A+), which fell by 0.1% over the last 5 days and has been able to register a mere 0.54% gain year-to-date.

Crude oil has had another bad week, dropping on news of rising output in Libya. The commodity has seen its viewership advance 12% over the past week, as the United States Oil Fund (USO B) tumbled nearly 6% since last Thursday, extending year-to-date losses to as much as 15%.

On Wednesday, news emerged that Libyan output was recovering from a technical glitch at an oil field, fueling concerns of a supply glut. An OPEC-led deal to reduce supply for another six months likely disappointed investors, who had expected a nine-month extension. Even with the cuts, there are growing fears in the market that other non-OPEC players, including U.S. shale companies, will more than compensate for the lost output.

Chinese sovereign debt was downgraded for the first time in 28 years, as the country continues to accumulate debt at a fast pace. A multi-billion-dollar arms deal between the U.S. and Saudi Arabia boosted Aerospace and Defense ETFs, while platinum failed to get a lift from rising retail demand in India and the U.S. and falling supply in South Africa. Investors in short-term bonds are worried about falling inflation in the U.S. Finally, crude oil prices tumbled on news of recovering output in Libya.