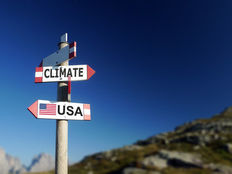 This week U.S. President Donald Trump drew a flurry of condemnations from global business and political elites for his decision to withdraw from a landmark Paris deal to cut carbon emissions. Consequently, it’s no surprise that alternative energy ETFs have taken first place on the list. Venezuela’s ongoing disaster was also at the forefront this week, taking second spot. Mexico, Semiconductors and Germany close out the list.

U.S. President Donald Trump has decided to pull out from a global landmark deal to cut carbon emissions, rattling international business and political elites. As a result, alternative energy equities took first spot this week, with a rise in viewership of 217%. Trump said last Thursday that the accord negotiated and signed by President Barack Obama in 2015 was unfair to the United States, and he vowed to try and renegotiate it. However, European leaders, including German Chancellor Angela Merkel and French President Emmanuel Macron, issued a joint statement saying the agreement could not be renegotiated.

Trump denounced the current climate deal as detrimental to the U.S. industry and jobs, while arguing other large polluters such as China and India chose an easier ride in fighting global warming. For instance, China pledged to reach peak emissions by 2030 and India committed to lower emissions per unit of GDP. The U.S., meanwhile, committed to cutting 26% to 28% of 2005 emissions by 2025. Critics of the accord, including Trump, believe this is inequitable, potentially leading some nations to prosper and the U.S. to suffer under the burden of climate regulations. Many business elites, including oil heads, beg to disagree by arguing that the potential damage from pulling out is far greater than the cost inflicted by job losses.

Business leaders, including Apple’s Tim Cook and Tesla’s Elon Musk, condemned Trump’s move. Musk and Disney’s Bob Iger even said they would step down from a White House committee in protest of Trump’s decision.

Despite the withdrawal, signs of hope that the U.S. will nevertheless lead the fight to reverse climate change is widespread. Many U.S. companies, cities and states said they would abide by the 2015 accord. In a blow to Trump’s action, the state of California signed a separate deal with China to work together on reducing carbon emissions with both pledging to improve trading ties particularly in the green technology areas.

There is also hope that the decision could be reversed on a federal level. According to the withdrawal rules, a country should wait three years before the exit is complete, providing ample time for a reexamination. As it happens, the issue is likely to be a top debate topic in the next U.S. presidential election. Guggenheim Solar ETF (TAN C+) was largely unchanged following Trump’s decision, although it is still up over 11% since the beginning of the year.

Venezuela has taken second spot on the list, with a 196% increase in viewership. The oil-rich country is quickly descending into chaos as the government led by Nicolás Maduro is resisting calls from protesters to step down. Protests against the government have stepped up ever since the Maduro-controlled Supreme Court ruled that it was taking over the powers of the legislature and barred a member of the opposition from running for office for the next 15 years.

Venezuela is finding itself in a mess, second only to Syria. The level of poverty has been rising over the past few years at an accelerated pace, as the government failed its citizens despite sitting on the world’s largest oil reserves. The disastrous policies have led to rising crime levels, widespread hunger, and hyperinflation, among other things.

It all started when Hugo Chavez won the elections in 1999 and initiated his so-called 21st century socialism, nationalizing vast areas of the industry, including the oil sector. Even small businesses struggled under heavy regulatory burdens, with many closing down. As a result, Venezuela became heavily dependent on oil dollars. Chavez had ridden the oil rally over the ensuing decade and kept himself in power by delivering massive handouts to the poor. However, his successor Maduro was less fortunate. Crude prices eventually collapsed, leaving a giant hole in the government’s budget and the country woefully unprepared to withstand the external shock.

Economic data on the country is scarce at the moment, given that national account data was suspended in 2015. The International Monetary Fund, however, predicts the economy will contract by 7.5% in 2017. Other indicators show that the nation’s international reserves have fallen to just $10 billion from $30 billion in 2013, when Maduro took office. Estimates for annual inflation have been an astonishing 720% for this year and are expected to cross the 3,000% mark by 2019.

Mexico is third on the list with a 91% increase in viewership, as the nation’s stocks have been hot lately despite negative rhetoric from U.S. President Donald Trump. iShares MSCI Mexico ETF (EWW A) has risen more than 3% over the past five days, extending year-to-date gains to 21.5%.

Most of the rally took place on Monday, after it emerged that President Enrique Pena Nieto’s Institutional Revolutionary Party (PRI) narrowly won elections in the State of Mexico. The markets rallied in relief, as Nieto beat populist Andres Manuel Lopez Obrador, although by a slim margin and only because the opposition parties were not united. Obrador is gaining strength on a campaign of nationalist pride in the face of mounting threats from Trump to build a wall south of the U.S. border and impose protectionist measures.

Semiconductors have seen their viewership rise 46% over the past week, as the sector’s stocks are on a tear. iShares PHLX Semiconductor ETF (SOXX A-) has jumped more than 2% since last Thursday and is up nearly 24% since the beginning of the year.

For a deeper analysis on individual ETF investments such as (SOXX A-) or (EWW A), use our ETF Analyzer tool. You can select ETFs by category or type as well as add individual ticker symbols to compare performance, expenses and dividend yield, among other metrics.

Germany is last on the list with a traffic increase of 27%. The iShares MSCI Germany Index Fund (EWG B) is up slightly this week but posted impressive gains of more than 18% since the beginning of the year, largely thanks to improving economic data across Europe and a fadeout of a populist wave.

The euro also rallied of late, as foreign investors eagerly flocked to European equities. But the European Central Bank still remains somewhat skeptical of the recovery. Just recently, it emerged that the ECB plans to cut its outlook for inflation due to falling energy prices.

This week was marked by two negative events. First, U.S. President Donald Trump withdrew from the Paris Climate Accord, drawing criticism from international business and political leaders. Second, oil-rich Venezuela is quickly descending into chaos, due to President Maduro’s failure to manage the economy effectively. Mexico investors were excited after the narrow victory in state elections by the ruling party PRI. Semiconductors have been on a tear thanks to advances in artificial intelligence, while Germany is attractive again because of the improving European economy.