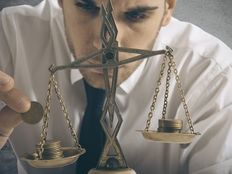 This Week's ETF Launches: The Dow 30 and Russell 1000 Get Alternative Weighting Strategies

Many ETFs use the popular market-cap method of weighting components within the fund, with the S&P 500 being the most well-known example. Lately, fund providers have been launching new products that use alternative methods of weighting their portfolios. Two new ETFs debut this week that do just that.

New iShares ETF Targets Large-Caps That Do Most of Their Business in the U.S.

Oppenheimer is perhaps the largest provider of revenue-weighted ETFs, managing roughly $2 billion in assets across 10 different funds, including three that were opened earlier this year. BlackRock is joining the revenue-weighting game this week by launching the iShares Russell 1000 Pure U.S. Revenue ETF (AMCA B).

The revenue-weighting strategy has gained recognition as a more conservative way of investing in large caps. Because it focuses solely on the sales generated by a company, it takes price, and by extension, valuation concerns out of the equation. A company such as Tesla (TSLA), for example, has a nearly $60 billion market cap, largely on the strength of its share price, despite relatively limited sales and negative earnings. A revenue-weighted fund would minimize any position in this riskier stock.

This ETF is indexed to the Russell 1000 Pure Domestic Exposure Index, a benchmark that includes those components from the large-cap Russell 1000 that derives at least 90% of its revenue from the United States. Any component that subsequently falls below 85% domestic revenue gets dropped from the index. At present, the fund’s top sectors include financials (23%), consumer discretionary (16%), healthcare (10%), utilities (10%) and real estate (10%). Top individual holdings are AT&T (T), Bank of America (BAC) and Wells Fargo (WFC). The expense ratio is 0.15%.

The problem with price-weighted indexes such as the Dow Jones Industrial Average is that it gives additional weight to an arbitrary number. A stock with a $100 price isn’t necessarily twice as valuable as one with a $50 price. For instance, Boeing (BA) and its $142 billion market cap comprises nearly 7.5% of the index, while General Electric (GE) and its $219 billion market cap constitutes just 0.8%. The difference? Price. Boeing trades at $235, while GE is priced at about $25.

The First Trust Dow 30 Equal Weight ETF (EDOW B) addresses that issue by putting all Dow components on equal footing. That strategy could make this ETF a bit more conservative than the DJIA because it’s less top-heavy. For example, in the original Dow, the top three holdings, Boeing, Goldman Sachs and 3M (MMM), make up 21% of the index. In the Dow 30 Equal Weight ETF, they constitute just over 10%. Equal weighting changes the composition of the fund a bit as well. Financials, tech and industrials are still the top sectors, but in the equal-weight ETF, they comprise 50% of the fund vs. 56% in the Dow index. The fund gets rebalanced quarterly and charges an expense ratio of 0.5%.

To check out all of the First Trust ETFs, click here.

WisdomTree Adds China A-shares to Two of its ETFs

MSCI made news earlier this year when it announced that it was including China A-shares in its emerging markets index, following several years of considering the move. Jeremy Schwartz, WisdomTree director of research, said, “Given the continued openness of the Chinese domestic stock market to foreign investors, we are operationally ready to implement this change.” The two funds will add the 50 largest companies that meet the index requirements. A-share exposure will be limited to 25% in CXSE and 5% in XSOE.

The equal-weighting strategy has served funds like the Guggenheim S&P 500 Equal Weight ETF (RSP A-), which has outperformed the S&P 500 by nearly 1% per year over the past 10 years. Given the weighting disparity of the DJIA, the Dow 30 Equal Weight ETF could enjoy similar success. Equal-weighting and revenue-weighting methodologies should continue to grow as fund managers continue to search for proven smart-beta strategies.