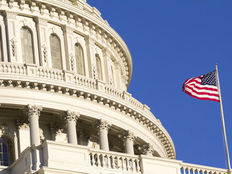 The U.S. Senate has finally passed legislation to cut taxes, sending banking stocks higher. Financial equities trended this week along with crude oil, which has moved sideways lately because of conflicting news. Artificial intelligence ETFs were third in the list thanks to media hype around the technology, while high-yield bond ETFs and retail ETFs took the last two positions. Check our previous trends edition at Trending: Newly Launched Technology ETF Draws Attention.

Financial equities saw their viewership surge as much as 81% this week, taking the first spot in the trends list. Banks and related financial firms rallied after the U.S. Senate passed legislation aimed at cutting the tax rate from 35% to 20%. Financial Select Sector SPDR ETF (XLF A) has risen more than 1% over the past five days, extending monthly gains to 4%. Year-to-date, (XLF A) is up nearly 20%.

To be sure, the Senate has passed a different plan than the House of Congress, so now the two chambers will have to reach a compromise around a single bill. At its core, the tax plan aims to reduce the effective corporate tax rate from around 35% to 20%. Industries such as banking, retail and fossil fuel energy are expected to benefit from the plan, while renewable energy and hospitals may end up as the bill’s losers.

The bill underwent a series of last-minute changes last Friday before passing in the Senate with 51 votes, and it could be changed further to please Congress. President Donald Trump suggested that the final tax rate could be around 22%. Asset managers such as banks currently pay an effective tax rate of between 30% and 35% because under the current regime they qualify for few deductions. Now banks are on track to receive an important boost to their bottom lines.

Crude Oil is second in the list this week with a rise in traffic of 66%.

The black commodity grabbed the headlines lately, particularly after the Organization of the Petroleum Exporting Countries (OPEC) reached a deal with Russia to extend supply cuts through to the end of 2018. A caveat in the accord prevented a rally from happening; however, both sides agreed to review the pact in July and reserved the right to tear it apart if the market becomes overheated.

United States Oil (USO A) has fallen 2.6% since last Thursday, with a major part of the losses occurring on Wednesday. The drop was due to a larger-than-expected buildup in gasoline inventories reported by the American Petroleum Institute and the Energy Information Agency (EIA). Although crude inventories fell by 5.6 million barrels in the December 1 week, gasoline stockpiles surged by 6.8 million barrels, according to EIA.

Underpinning oil prices, this week Goldman Sachs upwardly revised its forecast for 2018 from $55 per WTI barrel to $57.50. Goldman analysts also said the risks for 2018 are tilted to the upside. Prices could find some support as U.S. shale oil players may think twice before rushing to increase production, as the image of high debt loads and bankruptcies still haunt oil executives.

Artificial intelligence ETFs saw their traffic rise 58% this week, in no small part because of the media hype surrounding the sector. In the current technology environment, it is difficult to separate traditional tech companies from Artificial Intelligence (AI), chiefly because many companies in the industry are also in the business of AI.

Facebook, Alphabet (GOOGL) and Microsoft (MSFT) are the leaders in AI advancement along with lesser-known Yext (YEXT) and Micron (MU). Thus, investing in Artificial Intelligence is similar to betting on the technology industry overall. Gaining exposure to PowerShares (QQQ A-) seems like a good way to bet on AI.

Another side of the coin are ETFs that use Artificial Intelligence to construct equity portfolios. One such instrument is the AI Powered Equity (AIEQ), which started trading in October this year. Although its start was impressive, (AIEQ) underperformed in November. (AIEQ) is up 1% since inception compared to the S&P 500, which has risen 2.6% over the same period.

High Yield Bond ETFs saw their traffic advance 49% this week, as the instruments continued their downward slide. iShares iBoxx $ High Yield Corporate Bond (HYG A) has dropped 0.65% over the past few days, extending monthly losses to around 1%.

For a deeper analysis on individual ETF investments such as (FNG) or (AFK B), use our ETF Analyzer tool. You can select ETFs by category or type as well as add individual ticker symbols to compare performance, expenses and dividend yield, among other metrics.

The downward move in high-yield bonds comes despite a strong equity market, something that has worried some observers. As it happens, high-yield bonds may not be entirely correlated with the broad market, such as the S&P 500, because many of the firms in the index are not issuing junk debt. High-yield bonds are released in greater quantities by smaller companies, which are present in the Russell 2000 index, down 2% in the past five days.

Retail stocks have had a good run over the past few weeks, largely thanks to strong sales since the holiday shopping season started. Retail ETFs saw a 47% jump in traffic, slightly behind high-yield ETFs. A strong holiday sales season boosted stocks of traditional retailers such as Costco, Wal-Mart (WMT) and Dollar Tree (DLTR).

Banks rallied this week thanks to substantial progress on the new tax code devised by U.S. Republicans. Crude oil traded sideways, as investors digested positive and negative news at the same time. Artificial Intelligence is hot this year and investors are seeking to gain exposure to the industry; although, it may be difficult to find listed pure-play AI companies. High-yield bonds continued to fall this week, while retailers posted an impressive bounce following a strong holiday shopping season.

Thanks to an increased reliance on technology last year, given the shift to working at home,...

With Record Prices, Is Panning for Gold ETFs The Right Idea?

It’s been a strong year for gold as the precious metal was highly sought after as a safe haven...