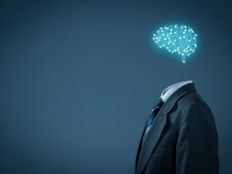 2017 was a year that will be remembered for many extraordinary events across the globe, with Brexit and the unlikely election of Donald Trump as president of the U.S. among the most surprising developments. In the first week of 2018, instead of the usual trends for the past five days, we take a look at the most popular topics in 2017.

The past year was full of geopolitical events, from the tough Brexit negotiations to a rise of global populism to the ongoing nuclear threats between North Korea and the U.S.. However, investors had something different on their mind, turning their attention to the emerging Artificial Intelligence sector and the broad technology industry. Rising geopolitical instability made the aerospace & defense sector the second-most popular topic this year, followed by volatility. High-yield bonds and real estate close the list.

Check out our previous trends edition at Trending: Commodities Continue to Rally as Global Economy Improves

Technology and Artificial Intelligence stocks trended the most in the past year, as the sector comfortably outperformed both the S&P 500 and Dow Jones. Impressive advances in machine learning this year coupled with improving earnings at many big technology firms wooed investors. PowerShares (QQQ B+) has risen 33.4% in the past 12 months, beating the Dow Jones Industrial Average (DIA B+) by more than eight percentage points and the S&P 500 (SPY A) by nearly 14 percentage points.

The impressive performance of (QQQ B+) was primarily driven by its largest holdings such as Apple (AAPL) – up 48%, Amazon (AMZN), which has surged 59%, and Facebook (FB) – up 57%. Amazon this year continued to increase its market share in online retail while capturing an ever-growing part of the brick-and-mortar market. 2017 marked Amazon’s venture into brick-and-mortar food retail with the acquisition of Whole Foods.

Apple continued to impress investors with rising sales and profits from its flagship device iPhone, although 2018 is expected to be a challenging year for the storied company as increasing competition and the lack of innovation put pressure on margins and growth. Facebook was at the forefront of innovation in social media, despite some challenges from emerging companies such as SnapChat. The launch of the video feature was a move that paid off, with visitors spending a bigger amount of their time on the site. Meanwhile, customers were further convinced that advertising on Facebook is working, boosting the company’s coffers.

Perhaps the biggest advance in AI this year was the fact that Google’s DeepMind won against one of the best Go players in the world. That was not predicted to happen until a few years down the road. The development stirred speculation that Artificial Intelligence could go mainstream and replace a host of jobs much earlier than expected.

It is hardly much of a surprise that defense stocks trended in 2017, given the increase in populism and geopolitical anxiety in the world. 2018 could see a surge in tensions, particularly between North Korea and the U.S. The year already started with tweets by U.S. President Donald Trump saying that his “nuclear button” is “much bigger and more powerful” than that of Kim Jong-un’s.

In such an environment, defense stocks have flourished, with iShares U.S. Aerospace & Defense (ITA B+) surging 33% over the past 12 months and easily beating both the Dow Jones and the S&P 500. Boeing (BA), which makes up more than one-tenth of (ITA B+), was the clear winner from the rise in geopolitical tensions, seeing its stock nearly double in 2017. To be sure, Boeing also benefited from an increase in demand for commercial aircrafts.

Defense stocks may have a great year ahead, given the U.S.’s plans to increase its defense spending. The U.S. is also pushing its NATO allies to expand their military expenditures to 2% of GDP, the target suggested by the treaty rules.

The nonpartisan Congressional Budget Office (CBO) estimated recently that the military buildup requested by the Trump Administration may increase spending by as much as $683 billion over the next decade. Not all of that sum will go to purchases of military equipment, as the CBO forecasted an 11% increase in the total size of armed forces. Still, if the budget is passed, companies such as Lockheed Martin (LMT) and General Dynamics (GD) will benefit enormously.

Although geopolitical concerns rose in the world, 2017 was one of the least volatile years in recent history, with global stock markets slowly edging up without big hitches. Indeed, volatility was so low that iPath S&P 500 VIX Short-Term Futures (VXX A-) reached an all-time nadir, with no signs of an imminent recovery. (VXX A-) has dropped 74% in 2017 alone, extending five-year losses to as much as 98.5%.

And for good reason. Despite a deteriorating political climate across the globe, all big economies grew in tandem, with Europe finally accelerating and emerging markets looking healthy after some tumultuous years. The Federal Reserve continued to raise interest rates without upsetting the markets, and the European Central Bank signaled clear plans to end the unprecedented monetary stimulus.

In 2017, investor attention moved away from the Fed to the Trump reflation trade. The U.S. president promised and succeeded in passing a bill to cut corporate taxes, leading to a strong stock market and a temporarily strong U.S. dollar.

High-yield bonds had another great run in 2017 despite a few hiccups along the road. iShares iBoxx $ High Yield Corporate Bond (HYG B+) has largely moved sideways over the past 12 months, although it ended the year slightly up. Junk bonds, overall, have returned an impressive 10.9% annualized since the Great Recession in 2008.

For a deeper analysis on individual ETF investments such as (VXX A-) or (HYG B+), use our ETF Analyzer tool. You can select ETFs by category or type as well as add individual ticker symbols to compare performance, expenses and dividend yield, among other metrics.

As the U.S. Federal Reserve gradually increases interest rates in 2018 and inflation accelerates, the outlook for high debt may suffer given that yields will likely rise and companies may find it harder to repay the debt.

Similar to high-yield bonds, real estate stocks had a flat year in 2017, largely moving sideways. The Federal Reserve upped interest rates three times in the past year, having a slight negative effect on real estate equities.

Typically, a REIT’s earnings increase when the economy gets stronger despite rising interest rates, but structural factors affected the U.S. real estate industry. Troubles in the brick-and-mortar retail sector put a lid on demand for commercial real estate, although the residential market was strong. Retailers of all stripes expanded at a fast pace in recent decades, but they hit a snag in 2017 as consumers shifted to online.

Vanguard REIT (VNQ A) has dropped 0.5% in the past twelve months, trimming five-year gains to 23%.

Artificial Intelligence made important strides in 2017, and many technology companies saw their earnings improve beyond expectations. Geopolitical tensions and potential military spending increases in the U.S. benefited aerospace & defense stocks. Volatility was scarce in 2017, as all important economies rose in tandem. High-yield bonds had another great year, but 2018 may be challenging as the Federal Reserve continues to raise rates. Finally, real estate ETFs underperformed due to falling demand for space from retailers of all stripes.