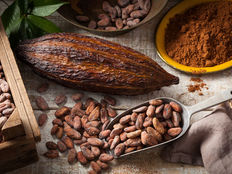 The new year started with scientists warning that the cocoa plant may disappear in the coming decades as a result of climate change, making cocoa ETFs the most popular topic.

Second on the list is the Nasdaq 100 Index, followed by the Dow Jones and emerging markets. The indices trended, thanks to a great start to the year on the back of investor optimism about the Republican tax plan and a booming global economy. Last on the list is the embattled leveraged volatility.

Cocoa ETFs have seen their traffic surge 350% in the past week, as many media outlets published articles containing predictions by scientists that the cocoa plant may be extinct by 2050 as a result of rising temperatures in the subequatorial regions. Scientists have contended that conditions favorable to growing cocoa plants may disappear in the coming decades as the climate becomes warmer and drier in Ghana and Côte d’Ivoire, the world’s largest cocoa producers.

The dire warning has not helped cocoa ETFs one bit. iPath Bloomberg Cocoa (NIB A+) posted a flat performance over the past five days and remains down a staggering 40% over the past two years. In fact, the cocoa market has been suffering from oversupply in recent years, hence the steep drop in prices.

Investors have obviously taken the news of cocoa extinction with a grain of salt. Scientists had previously made warnings about the cocoa plant, but supply continued to grow. Moreover, chocolate-maker Mars recently committed $1 billion to a research program seeking to make genetic modifications to the plant that would allow it to survive under harsher conditions. If the program is successful, the warnings may fail to materialize.

In addition, the cocoa plant is grown in many other parts of the world, not just in Ghana and Côte d’Ivoire, the regions expected to be affected by climate change the most. South American countries Brazil, Ecuador and Colombia are among the top 20 world producers.

To be sure, supplies of cocoa beans may suffer in the coming years as many farmers have struggled to make ends meet at current prices. As a result, they may shift from planting cocoa to other more productive cultivations, putting a strain on prices.

U.S. equities have had a good start to the year across the board, as investors remain confident in the global economy and see few reasons for a looming correction. The technology-heavy Nasdaq 100 was among the best performers in the past five days, with PowerShares QQQ (QQQ B+) rising 1.6%. As a result, its traffic increased by 176%.

The optimism about the global economy has been coupled with the potential for a huge corporate tax cut in the U.S., a big tailwind for many U.S. corporations. Investors now expect company earnings to continue their march higher, particularly as many of them still see the stock market as undervalued.

David Tepper of Appaloosa Management recently said the market is as cheap as it was a year ago, while Jana Partners’ Barry Rosenstein agreed with the investor, saying he has been heavily invested in the stock market. Adding to the chorus of optimistic voices, legendary investor Warren Buffett said the corporate tax cut is not yet “baked” in the stock market, indicating there is further upside.

The U.S. Republicans recently passed a plan that will see the tax bill of many corporations reduced from 35% to 21%, although a large part of U.S. technology firms may not experience a big tailwind given they had already been paying less on average thanks to the use of deductions.

For a deeper analysis on individual ETF investments such as (QQQ B+) or (NIB A+), use our ETF Analyzer tool. You can select ETFs by category or type as well as add individual ticker symbols to compare performance, expenses and dividend yield, among other metrics.

Dow Jones saw its viewership rise 137% in the past week, not far behind the Nasdaq 100. However, its performance has been superior since the start of the year, with SPDR Dow Jones Industrial Average ETF (DIA B+) advancing 1.8%. Over the past 12 months, (DIA B+) has risen 28%, underperforming Nasdaq 100 by roughly 4 percentage points.

The prospect for tax cuts and a strong economy has boosted Dow Jones, which is viewed as relatively undervalued compared with other indices. Looking ahead, the Dow may be up for a correction from its record highs. On Wednesday, markets were rattled by an announcement that China may reduce or stop altogether purchases of U.S. debt. The Chinese government apparently believes the U.S. government bonds do not represent an attractive proposition relative to other assets, although tensions with the U.S. government may have also weighed in.

Emerging markets have posted one of the poorest performances since the start of the year, as fears of rising interests rates and bond yields across the board weighed negatively on the asset class. Emerging markets took fourth place on the list with a 135% rise in viewership, slightly behind Dow Jones. Emerging markets (VWO A+) have advanced just 0.2% over the past five days, with the index erasing most of the previous gains on Wednesday.

Surging U.S. Treasury yields and a rally in local bonds sparked outflows from emerging markets, although the long-term outlook seems bright. Chinese shares bucked the trend this week, rising for nine days in a row.

The World Bank predicted that global growth will slow a little in 2018, but emerging markets are likely to post the best performance. The bank said that East Asia and the Asia-Pacific Region are slated to grow at an accelerated pace.

Leveraged volatility saw its viewership rise 124% this week, as the troubled asset continued its decline. ProShares Ultra VIX Short-Term Futures (UVXY B-) has fallen more than 3% in the past five days, with most of the losses taking place on Wednesday. Because of its leveraged nature, (UVXY B-) was up as much as 4.7% at some point during the day.

With a strong global economy and robust stock markets, volatility ETFs are expected to continue their decline, although they still present a way to hedge against unexpected downside.

Warnings by scientists that the cocoa plant may become extinct in the next 30 years has made headlines this week, although the fears may prove to be overblown. Nasdaq 100 continued its gains this week, but it underperformed the Dow Jones index, which may experience a correction after China reportedly wants to stop buying U.S. Treasuries. Emerging markets have suffered lately due to higher bond yields across the board, while leveraged volatility continued its downward spiral.